A Bag of Milk Costs How Much?! 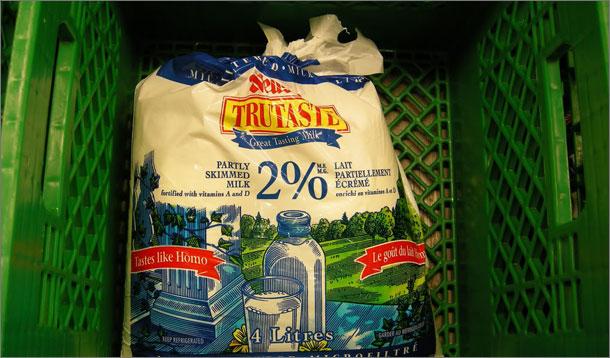 If you thought milk was expensive where you live, spare a thought for communities in northern Canada where the price of a 4L bag is guaranteed to make your eyes water and your wallet bleed.

But the Manitoba government plans to cut the cost of milk and other essential staples in remote northern communities. Premier Greg Selinger hopes the federal government will include these remote areas in its subsidies Nutrition North Canada program.

"We also have had contact with some of the private food providers in the north and we want everyone to come together to find a solution," said Selinger. "When I went up there, I saw a jug of milk—four litres—at over $20. We'd like to get it down into the single-digits like the rest of us have."

The federal Food Mail program previously subsidized shipping companies' costs for food deliveries. But the Conservatives altered the $54-million initiative in October 2010 to subsidize retailers instead of shippers, and the subsidies only applied to healthy foods.

This past weekend protests took place in communities across Nunavut. Manitoba's Liberal Leader Jon Gerrard urged the NDP government to implement a single price for milk across the province. In an ideal world, milk should cost the same whether you are in downtown Winnipeg or a fly-in northern town. At least that's how it is with liquor. And it makes no sense that milk should cost a fraction of that of soft drinks.

"It's important for nutrition and in fact, by keeping children healthy we're going to save a lot of money in health care," said Gerrard, adding more affordable milk would translate to lower rates of diabetes, tooth decay and other diseases.

Are you as shocked and disgusted as I am? It's unclear at this stage whether the province will subsidizing the store owners or shipping companies. But clearly more has to be done to bring healthy foods to residents in northern Canada.