Say No to Jellies 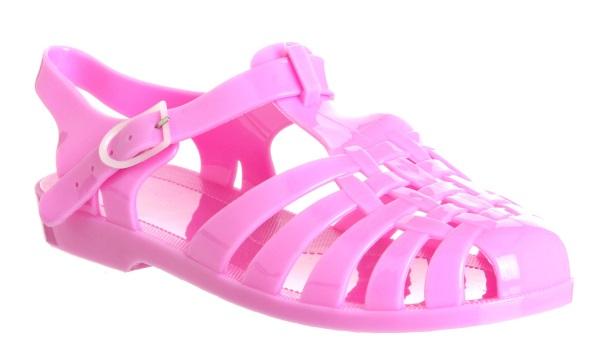 First, it was this seemingly innocuous summer hazard. Now, parents need to look out for another hidden danger: sandals.

Yes, those sandals may be the cutest thing ever. But a UK mom of a two-year-old girl was horrified to find that a pair of simple jelly shoes - a birthday present, no less - left her daughter's feet in a bloody mess.

After only wearing the new pair of pink sandals for just half an hour, little Esme Connor was left with deep cuts in her right ankle.

Though the sandals were from the UK retailer, Next, they are not dissimilar to styles found this side of the pond, too.

"It's not like she was running around in them for hours," said mom, Lisa Connor. "She was just plodding around the house and then came running in in tears. There was blood all round her ankle and on the soles of her foot. Of course there will be new shoes that rub, but this is ridiculous."

Connor is hoping photos shared on Facebook will prompt Next to recall the sandals.

Even though the site listing for the item claims they are "fun jelly sandals for short term wear only" - maybe they are not fit for wear any length of time, given how active toddlers are.

For Connor, it was heartbreaking to see her daughter in pain, and unable to fully communicate.

"She was moaning and whining, and I initially put it down to being tired," said Connor, before she discovered the source of Esme's discomfort. "There was so much blood. Her dad had to spend an hour calming her down. It ruined her birthday weekend really."

Jelly shoes have been around forever. Or at least since I was a kid, which makes them, like, really ancient. And they have always been uncomfortable, blister-inducing, and dirt cheap for a reason.

Next time you are tempted by the jelly, keep walking. And when it comes to kids' growing little tootsies, word to the wise: steer clear of this popular footwear, too. Your best bet is the old faithful socks and runners combo. Their feet will thank you for it.