Knocked it out the park 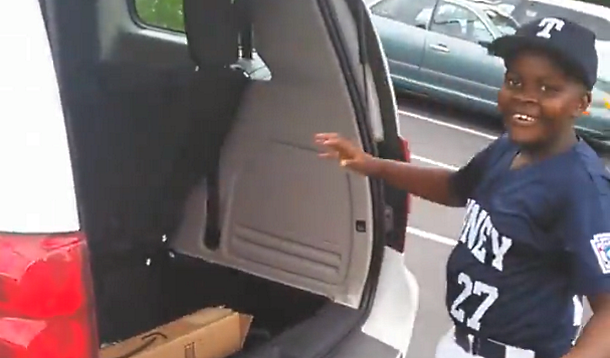 Hang on, there's dust in my eyes. Or something... This video of a dad surprising his boy with a belated birthday gift is guaranteed to knock you hard in the feels.

In the footage of the viral clip, 12-year-old Braheim looks clearly dejected as he slumps in the front seat, getting ready to head to his baseball game. He thinks his dad forgot his birthday.

What he doesn't know is that his unemployed dad, 36-year-old Devon Fowler, has something special tucked away for him in the trunk. Something his son wanted badly. Something his dad had to work odd jobs just to afford.


Yeah, I defy you to stay dry-eyed as you watch Braheim's reaction when he pops the trunk.

I can relate. There's something about knowing your parents can't afford all the special things. There's a disappointment, but also resignation.

I grew up with a hard-working single mom. Like many single parents, she bent over backwards to give me the best. Yet at the same time there was this realization even in my young brain that things were harder for us than they were for other families. That I couldn't have everything I wanted whenever I wanted it.

I see that same realization reflected in Braheim's eyes as they well up. Man, that parking lot must be dusty, too...

My son will never know that feeling, and in some way, it annoys me that he takes his creature comforts for granted. He is luckier than he'll ever know.

This poignant video has hearts - and wallets - opening all over the place. It has already notched up more than 23 million views. A Kickstarter campaign is helping bankroll the boy's dreams of becoming a pro baseball player. Hopefully all the attention will help his dad get a job, too.

See, sometimes the internet isn't such a hostile place.

RELATED: This Mom Just Got The Best Birthday Present Ever