Study: Couples Who Drink Together, Stay Together 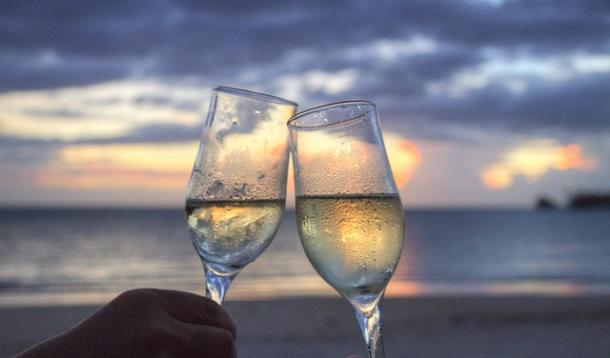 Every now and then a study comes along that warms the heart. A study you swear was conducted just for you - to vindicate your current lifestyle. One example is all the research suggesting that wine and chocolate are beneficial to your health and wellbeing. Well, duh. I could have told you that without a grant.

Another such study, from of the University of Michigan, has surfaced. The gist: that couples who drink together stick together. Believe it.

The results were published in The Journals of Gerontology Series B: Psychological Series. So it seems like booze may truly light the fire when it comes to romance.

In nearly 3,000 couples over the age of 50 married for an average of 33 years (the bulk of which were on their first marriage), those who were on the same page when it comes to alcohol consumption were more likely to claim they were satisfied with their relationship. Particularly the wives.

And that satisfaction came when either both partners drank, or both abstained from alcohol.

"We're not suggesting that people should drink more or change the way they drink," said study author, Dr. Kira Birditt. "We're not sure why this is happening, but it could be that couples that do more leisure time activities together have better marital quality."

Birditt was careful to clarify that people shouldn't take the study as an excuse to drink more or change their drinking habits, notably baby boomers. (Twenty per cent of men and six per cent of women involved in the study reported "significant drinking problems.")

Liquor doesn't make problems go away. But the crux of the study suggests is that if couples are drinking together, then they are presumably letting their hair down and conversing together. Whether they are having serious talks or laughing their asses off, they are raising their glasses, spending time together and connecting. So, when taken in this context, the booze is incidental.

Still, a nice vintage can't hurt, right? So the next time you want to infuse the air around you with love, forget the candles and Miles Davis. Just head down your nearest LCBO.

​ RELATED: Advice on Not Getting Accidentally Drunk this Summer