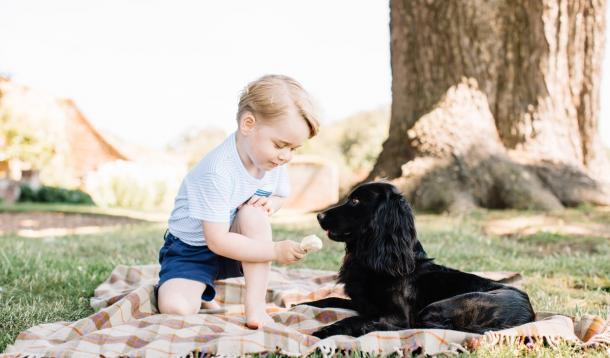 It's George's birthday. You know, George - the most famous three year-old on the planet. You know, 'Third in Line' George. Royal George, son of Prince William and Duchess Kate, who is unbearably adorable despite the gentlemanly side part and the old-fart name.

Kensington Palace posted the standard unbearably cute photo of Prince George. And more than 2M retweets later, the interwebs are having a heyday marking the occasion and speculating about how George's day will go down.

Have a peek at George madness and this montage of his most precious moments to date.

Once you've cleaned the drool off your keyboard and quelled the pangs from your uterus, check out the Telegraph's humorous diary of a threenager:

George may be the most photographed baby and toddler ever, but he's still turning three so he - and his parents - are still subject to the whims and tantrums of a 'threenager."

That means finicky and demanding (pity the Nanny who forgets to cut his sandwiches into perfect triangles!). That means asking the big life questions ("Is heaven real? Why is daddy’s hair falling out?")

He'll still squabble with his kid sister, Charlotte. He'll still occasionally forget to go potty and pee on a regal carpet (one can only hope). He'll still prefer Goldfish crackers over broccoli florets. He'll still get spoiled by Granny, Aunty Pip and his badass uncle, Harry.

And he'll still get stuck wearing weird clothes that look like they were made for dolls instead of boys...

Being a threenager isn't easy, even if you happen to be Royal. I say rock it, Georgie, and enjoy the simple - relatively speaking - life while you still can.

What the Royal Couple Should Know About Raising a Charlotte