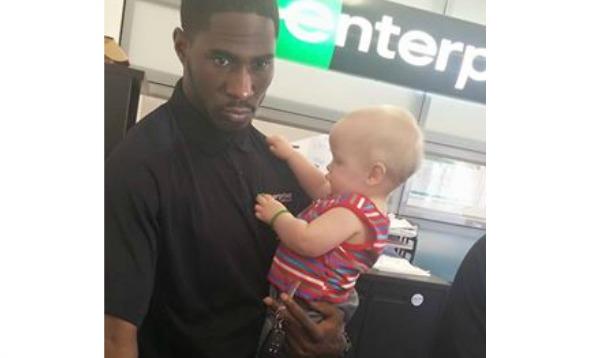 I don't know about you, but we are in dire need of some happy news. If it isn't racism or terrorism, it's some other awful -ism polluting the feeds. So it's refreshing to stumble across a simple story of One Human doing Good Deed for Another Human.

John Goodlett had just started his first week of work at Enterprise Rent-A-Car in Oklahoma when he had to pick up Coty Vincent. The single mom of twins had car seats for her 11-month-old boys but no stroller with her.

Instead of just letting the mom "fend for herself," the 25-year-old employee was more than happy to lend a hand - literally - holding one of the twins while processing her rental.

Vincent was so impressed by the man's multitasking and charmed by his kindness, she snagged a photo of him with her baby.

"One of the most compassionate and caring people I've ever met," wrote Vincent in her Facebook post. "We need more people like John who go that extra step. Be a John. #BeAJohn"


She shared the image on a few twin mom group pages, where the post quickly racked up reactions and shares among members. The rest is viral history.

Enterprise took notice - awarding Goodlett with a gift card that he (no surprise) chose to donate to a kids' charity run by the Salvation Army. Vincent got herself a double stroller, to make travel easier.

Goodlett, who also happens to be a twin, was taken aback by the attention and the recognition he received for doing "something that should come naturally to others." It goes to show you what poor shape the world is in when minor acts of kindness prompt mass media fuss. But there you are.

"There are a lot of great Americans in this country and that's what we really need to see, because people are getting depressed and hearts are getting so heavy from everything going on right now," said Vincent.

"It's up to us to turn this around. So many have forgotten we are humans and we do kind things and we do treat with each other with respect, and smile and hold doors open and do these little things. I want to remind people they can be kind to one another."

Now, go forth and be a John.