Why all the judgment? 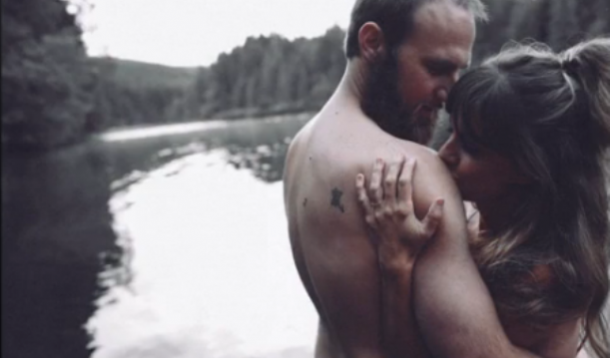 A mom-of-three has been openly trashed after participating in an intimate photo shoot with her husband.

Canadian photographer Trina Cary wanted to “showcase self-love, couples love, postpartum and body confidence all in one go.” She found the perfect client in Mel and husband Gabby. After all, Mel had had three babies in the space of a year, and though her husband was supportive, she struggled to “adapt and fall in love” her postpartum body.

“You don’t have time to think of the way you look most days, but sometimes you catch a glimpse of your body and hardly even recognize the reflection staring back,” Mel wrote in a blog post. “[Gabby] still thought I looked as beautiful as the day he met me. It was time for me to feel the same about myself and set an example for my girls.”

The photos soon went viral. But instead of women celebrating a fellow woman, the internet was quick to disparage the shoot and slut-shame Mel. Some openly judged her body, saying she was too “skinny to be insecure” while others called her a “slut and a hoe.”

I saw nothing but an intimate moment captured between a married couple who clearly love each other.

So where was all this judgment coming from? Why all the hate? Was it because the images were publicized? Well, photographers like Cary have businesses to promote. You can’t be a photographer without showing off your actual handiwork...

It saddens me that any confidence Mel gained as a result of doing the shoot has long been eroded by the negativity. So much for acceptance.

Anytime you put yourself out there online you become a ready target. Every day that bar is lowered, and even a kiss between a mother and child spurs hate and judgment. Seriously, is anything or anyone immune anymore?

Interestingly, no one had a bad word to say about Mel’s husband, even though he too was exposed in the photos. Go figure.

Cary lashed out “the authors of these [hateful] comments because they are the ones who need a session like this most but will never have the courage or strength to do one. They are the ones shrouded in jealousy and insecurities and choose to reply out of spite.”

Here's what some of our wise bloggers here at YMC had to say:

"It makes me sick that anyone feels they have the right to comment on and shame another person's body size or shape. I've struggled my entire life with body acceptance and it's stories like this that really take the wind out of my sails." ~ Ashley MacInnis

"I will never have the body I had before motherhood and I am (mostly) completely okay with that. I deal with this "new normal" by poking fun at my own (never anyone else's) jiggles and bumps. Chocolate helps too :) Lots and lots of chocolate. As for the Internet haters... if you put yourself out there, you can expect commentary from all sides. It may not be fair, but it's reality. Unhappy people can't help but try to make others miserable too so all this shaming must mean there's a lot of dissatisfaction all around. Sad." ~ Andrea Mulder-Slater

"I thought it was beautiful... but it doesn't matter what I think, it matters what that woman thought. Did she do it to empower others or did she do it because she wanted to feel good about herself? If its the latter than it should never have been shared online at all. Anything online seems to be subject to judgment and objectification. The internet has become a sad, sad place. Everyone is entitled to their opinion but that doesn't mean they are entitled to express it publicly or directed at a target. That's bullying. What happened to "if you don't have anything nice to say, don't say anything at all"?" ~ Catherine Coode

I personally love these photos. And even though I’ll probably never be comfortable enough to put myself out there the way Mel did, that does not give me or anyone else the right to comment on her or her body. As women we have to move past this sense of entitlement. All it does is serve to make us look petty and cruel.

As one commenter put it, if you don’t like what you see, there’s this little thing called a ‘back’ button. All you have to do is press it and carry on with your day.

RELATED: Woman Told by Airline to Change Her "Inappropriate" Shorts