never too young to learn about love 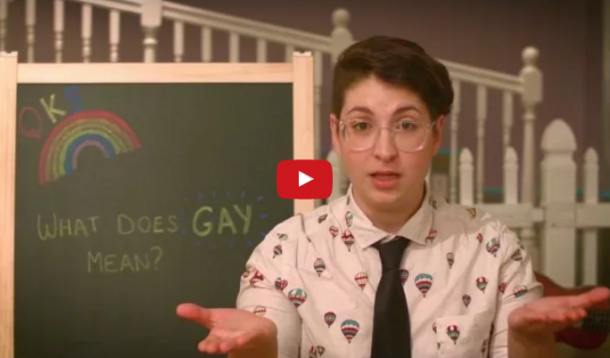 Kids are naturally curious. Yet as parents we feel unprepared - even unwilling - to answer many of their questions. Enter a new web series aimed at providing preschool-friendly information about the lesbian, gay, bisexual and transgender (LGBT) community.

In the first episode, “Queer Kids Stuff“ creator Lindsey Amer addresses the question, "What is 'gay'?" in a way that even young children can understand.

While some would argue that introducing the language of the LGBT community at preschool as too early, Amer has a valid point. If parents don't broach the topic (and some absolutely won't), children risk learning from other sources. They risk learning ignorance and intolerance. After all, the seeds of hate sprout early...

“... what happens if the first time [children] are introduced to a queer topic, it has a negative connotation?" asks Amer. "As soon as that happens, it is far more difficult to undo that moment, than it is to simply introduce the topic truthfully and positively first.”

Although I object to the name of the series (since when is 'queer' an acceptable rhetoric for kids?), Amer is arming children with a simple framework to describe the variations of love and family they will see in the world.

From the moment they set foot at school, kids will no doubt encounter classmates with single, same-sex, or divorced parents. So it's important for them to understand that families come in all different configurations. There is not simply one right way to love. And after recent events in Orlando, I can't think of a lesson more relevant to the next generation.

As far as I can see, the series - at least not this episode - is not about pushing any agenda other than that of acceptance and diversity.

Whether we are ready or not, preschoolers are curious about what they see in the world, and we have a responsibility to answer them honestly and respectfully.  Amer has provided parents with simple, straightforward dialogue to do just that.

I can't help but think if only certain grown-ups had heard her message when they were knee-high to a grasshopper, the world wouldn't be in half the mess it is right now.