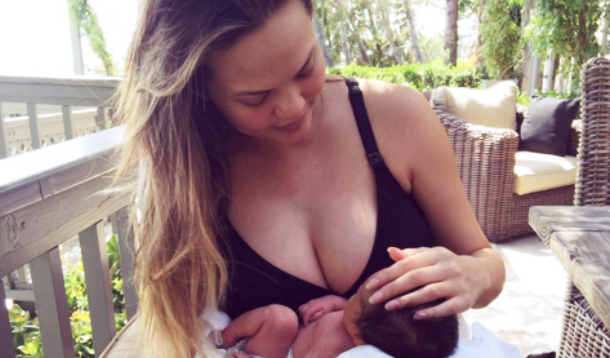 Here's a question. How soon should you go out on the town for the first time after you have a baby? If you're Chrissy Teigen, the answer is 10 days after you give birth.

In fact, that's a trick question because there is no right answer. Or rather, the answer is: whenever you bloody well feel like going out, provided you haven't gone and left your baby in the backseat of your car...

But unfortunately not all social media users are aware of the cardinal rule of motherhood. Thou shall not shame other mamas.

Teigen got the first - but by no means the last - taste of internet vitriol after she deigned to go out to dinner with hubby John Legend.

I went to dinner. People are pissed. Good morning! pic.twitter.com/oQ54mtet8c

Instagram was rife with comments like “She’s hitting the streets already???? Damn these so-called celebrities want to show off so bad after giving birth. Spend bonding time with your baby and not let the nanny or babysitter raise them!”

And: “That spotlight pull be strong. One week. Who wants to leave a one week old baby to go to a bar?”

But Teigen proved that when it comes to parenting criticism, she's no wilting violet. She handled the haters with aplomb, calling out the passive aggressive remarks with coolness and humour.

Take her response to “How’s baby Luna,” from a "concerned" commenter.

i dunno i can't find her https://t.co/fEj8rFHEMI

Bravo Chrissy! Now that is how you shut down a mommy shamer.

RELATED: Let's Make it a Girl. Is Choosing a Baby's Sex Wrong?