Coming to a galaxy near you... 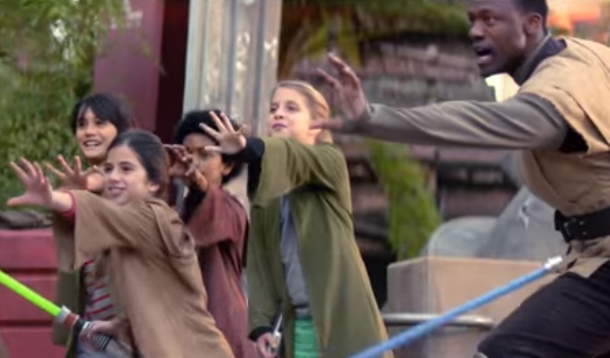 “Star Wars is, for lack of a better word, awesome,” said Harrison Ford about the Star Wars-themed exhibit coming to both Disney parks in Florida and California.

While construction is currently underway, Disney unveiled plans for the new exhibit during a 60th anniversary TV special, Disneyland 60. And who better than to introduce Star Wars Land - which will not be "in a galaxy far, far away, but in a place close to home” - than Han Solo, aka Ford?

Good news for fans young and old, who will be take control of the Millennium Falcon, explore various locales of the movies, battle between the Resistance and the First Order, and even gobble some Star Wars-themed cuisine in the cantina.

To be honest, I'm only surprised that Disney and Lucas and Co. didn't cook up this collaboration sooner.

“I’m so blessed that I had the opportunity to be a part of it, to talk in these iconic locations, and soon, you’ll be able to do that as well," promises Ford.

Now you too can have a gander below at what's in store at Star Wars Land.

Judging by the concept art, this is one Disney exhibit that kids of all ages - yes, even those with crow's feet and silver hair - will be raring to check out.

As Tom Petty once said, waiting is the hardest part.

RELATED: Is Everything Awesome at New LEGO Hotel?