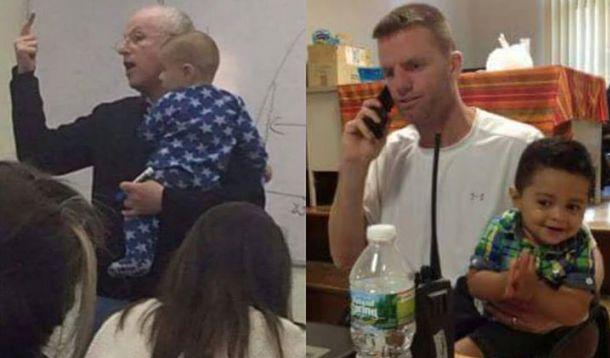 For some teachers, it's just a nine till (not even) five. For others, helping students achieve their goals and reach their potential remains a true labour of love. A vocation, not simply a pay check.

One such teacher is Tommy Guy, who like Professor Engelberg before him, shot to internet fame after a photo of the Springfield, Massachusetts teacher went viral.

All Kimmy Lopez wanted was to get her high school diploma. But life stood in her way, and going back to school seem like an impossible feat. She was determined to graduate, yet she was living in a shelter. She had a 10-month-old son and like many young single parents, couldn't afford day care.

Incredibly, when she told the school of her obstacles, instead of sending her away, admins welcomed her and her child with open arms.

Lopez claimed that one teacher in particular went above and beyond the usual call of duty - even babysitting the infant - so she could study.

Teachers are the real MVP. To the left a photo, that has gone viral, of a professor holding a students child because he...

"I had no daycare for my son," wrote Lopez in her Facebook post. "I thought it would stop me from finishing school but once I told the administrators my issue they told me to bring him to school with me. They set up a play pen in their office, brought toys and snacks for my baby, he even took my son to run errands with him, all so that I could come to school every day, study peacefully and focus on my books so that I graduate with my class."

Guy's reputation precedes him. Around Central High School he's known for his dedication, often seeking out kids who've dropped out and encouraging them to come back to school.

She called her teacher "the real MVP," yet for his part he downplayed his role in Lopez's success, saying "she was a very focused student" and caring for her son was a "piece of cake."

We often assume that some young people are simply too lazy to learn. But the reality is that many kids face genuine obstacles that get in the way of learning.

Lopez is now in culinary school in Atlanta, Georgia.

If only teachers like Guy weren't the exception, but the rule. Sadly - and not to put too fine a point on it - in many cases the purse strings come before the kids. If only all schools went the extra mile to accommodate learners.