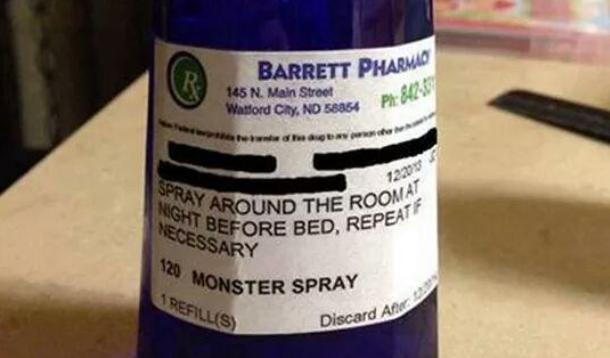 Is your child afraid of the dark? Are there monsters lurking under the bed or hiding in the recesses of his closet that make sleep a terrifying prospect?

If so, you may just want to head to your local Shoppers Drug Mart where a friendly pharmacist can prescribe your kiddo just the antidote needed.

It worked like a treat for a dad in Sooke, B.C., whose pharmacy was only too happy to print out an official-looking prescription sticker for the fictitious "monster spray" bottle he supplied.

With a 100% effective rate, the spray is to be administered as follows:

"Spray around bedroom at night before bedtime and repeat if needed."

The photo racked up a lot of likes on Reddit, but it seems "monster spray" has been around for a while, in various formats.

Monster spray from the best Dr in the world @cowcart1 @Hannah9215 pic.twitter.com/0rFsIKCUR3

Even better if the spray happens to smell of comforting lavender essence.

So I'm going to head down to my local pharmacist and see if they can prescribe a spray that will keep all those grown-up monsters (debt, ISIS, cancer, federal election, etc) at bay.

While she's at it, might as well through in spiders and snakes, too... Couldn't we all use a good night's sleep?