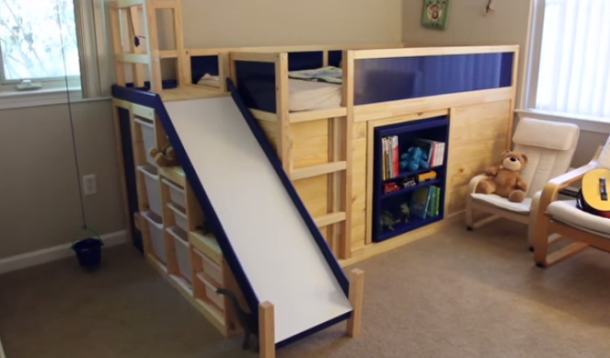 When trying to persuade his toddler to graduate to a big kid bed, dad Eric Strong had to first promise that he would give his son the "most awesome bed ever." After you see the extreme IKEA hack Strong came up with - that includes a secret chamber, slide, pulley and ball machine - there's no doubt that he did just that.

In case you didn't know, IKEA hacks are a big thing on YouTube.

Taking his inspiration from those who bravely hacked before him, Strong MacGyvered his own one-of-a-kind design, using various IKEA components, including two Kura Kids Bed, bookcase, LED lighting.

He repurposed the entire thing, then posted his creation on Reddit and Imgur. The finished product comes complete with a hidden chamber (activated by the classic fake book on the shelf trick), a slide, secret lookout, and a fully-functional ball run with rope-pull bucket.

Of course there's a critic born every minute, and Strong duly addressed the safety concerns raised on his design as follows:

"Rope is taken down when son playing by himself. The posts at bottom of slide have been sawed down and rounded since this video. The electric socket is no more dangerous than any other in the house. An adult can disassemble within seconds if he is stuck inside."

So take that Ryan Reynolds! You may need to crack out the beer and the duct tape in order to put together a basic crib - but not this guy.

Watch this on The Scene.

I'm wondering if he would consider making an adult version of this bed with a funnel feature that supplies wine and chocolate and Ryan Reynolds movies on demand. I'd pay good money for that.

RELATED: When Can Your Toddler Start Using a Pillow?