Learn From This Mom's Scary Close Call With A Bath Chair

Always stay beside your baby when taking a bath 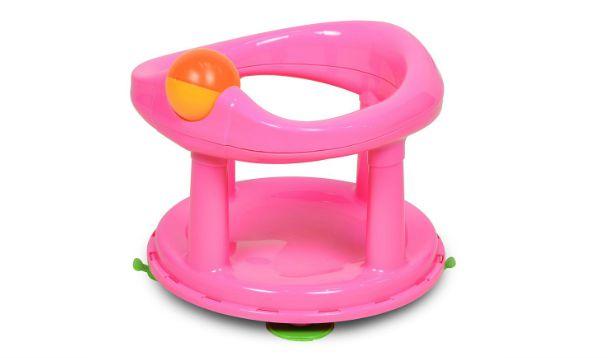 Mom Suzie Dyball had a terrifying close call while bathing her seven-month-old daughter, Felicity, and doesn't want the same thing to happen to other parents.

Everything was going swimmingly when Felicity's bath chair tipped and became unbalanced, causing the baby's head to slip underwater.

It took only seconds for her mom to free her from the Safety 1st swivel seat, during which time the infant stopped breathing.

"I put her over my legs and hit her on the back, which got her to cough up some water, and she started breathing in gasps," recalls Dyball.

"It was at this point I managed to dial 999 on speaker-phone ... Her eyes closed and she went a bit dopey a couple of times but then she started breathing better and came round properly."

Fortunately by the time paramedics responded to Dyball's call, Felicity was fine, albeit a bit pale. The incident rattled the mom enough for her to issue a viral warning to parents on her Facebook page:

*EDITING TO ADD THIS DISCLAIMER* This is the only article I have given permission for and spoken the the journalist...

Dyball claims she was using the swivel bath seat correctly (fully suctioned, with water at designated level), and is concerned about the safety of similar products on the market.

"But when the seat tips, it does so in a way that stops the baby being able to turn their head out of the water."

Since her Facebook post, others have shared similar harrowing incidents of tipping bath seats. Some babies had to be resuscitated, others ended up in comas, some sadly died.

"The seats give a false sense of security but are clearly not stable," said Dyball.

"My warning is about not trusting the seats - if you have to use one then keep your hands on it or your baby at all times and be aware that they can tip."

Manufacturers of the Safety 1st seat confirmed their seat conforms to safety standards, but that it's not intended to be a substitute for full supervision.