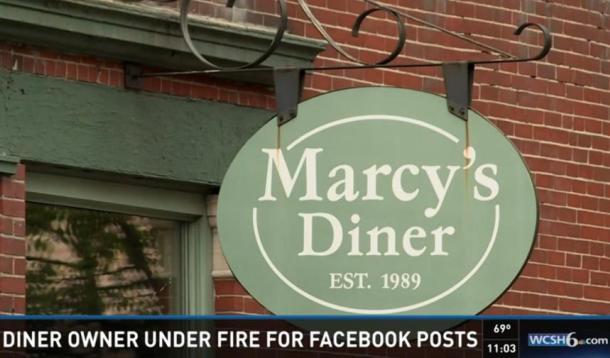 Sorry, not sorry. That was essentially the response the owner of a Maine diner gave after she yelled at a toddler who would not stop crying.

Darla Neugebauer claimed the two year-old had been crying non-stop for 40 minutes while her parents talked and largely ignored her.

Despite the backlash on social media - with many people vowing to never again eat at Marcy's Diner again - some feel sympathetic to Neugebauer.

While there's absolutely no doubt she should not have shouted at the child, her frustration was somewhat understandable.

The girl's parents claimed that her crying was normal while waiting a long time for food, yet by all accounts they did little to try to placate their daughter or even feed her when the pancakes arrived.

It was at this point that Neugebauer cracked, slammed her hands on the counter and told the tot to “shut the hell up.” A crazy, disgraceful thing to do.

Yes, children sometimes cry when they are hungry. But if you are in a public place, you don't just let them go at it for close to an hour. Maybe you ask staff for some bread or a small snack to tie them over, or you ask for their meal to come first. You bring out a toy or some other diversion. You cuddle them. If that doesn't work, you get up and take them outside for a while.
If all else fails - and your child has passed the point of no return, like mine has on a couple occasions - you call it a day, grab the bill, pack up your food, and leave.
It's not rocket science. This owner lashed out in a totally reprehensible way when she should have appealed to the parents instead.
The child in this case was simply being a child, while all the adults involved behaved badly.
Image Source: WCSH6.com