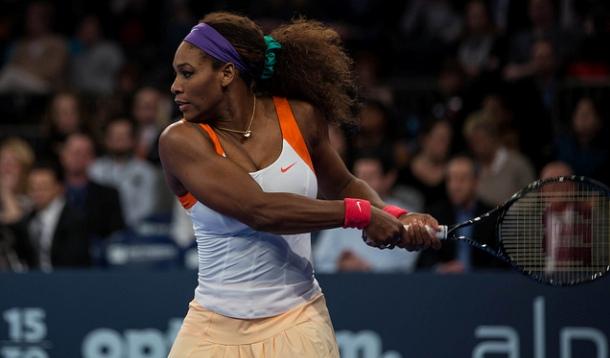 You may have spotted Serena Williams sporting a sleeveless dress, doing her Bee Gees victory dance after this year's Wimbledon win. But it was a rare sight since Williams often covers up her trademark "large biceps and a mold-breaking muscular frame" when in public.

An New York Times article described how many of Williams's fellow tennis stars are at odds with their bodies and consciously choose to avoid bulking up.
“Of course I care about [how I look] as well, because I’m a girl,” said Agnieszka Radwanska.
And Andrea Petkovic confessed that she can't stand seeing images of herself in particular poses because of the way her muscles bulge. This - pinch me - in the year 2015.
“I just feel unfeminine,” Petkovic said. “I don’t know - it’s probably that I’m self-conscious about what people might say. It’s stupid, but it’s insecurities that every woman has, I think. I definitely have them and I’m not ashamed to admit it. I would love to be a confident player that is proud of her body. Women, when we grow up we’ve been judged more, our physicality is judged more, and it makes us self-conscious.”

It's sad and unfathomable that many players don't share Williams's pride and comfort in their own skin. As the 33 year-old champ readily admits, "I’m really happy with my body type, and I’m really proud of it. Obviously it works out for me."

Obviously. Depends what you're after, I suppose. For Williams, it was pushing her body to win titles, to get to the top of her game and stay there. If it's modelling and sponsorship contracts you're after, then "manly" arms are a definite no-no.

Sponsors like their tennis players feminine-looking and preferably blonde. Just ask Maria Sharapova, who was the highest paid athlete for the longest time, despite having never won Wimbledon. Sharapova deliberately avoided weights.

Frankly, I'm gobsmacked that we are analyzing and shaming the bodies of our most elite athletes when we should be celebrating their strength and incredible feats.
When will we start treating them like athletes instead of wannabe centrefold models?

Imagine reading a full-length piece that criticized Novak Djokovic's frame for being too slender and not masculine enough. It's hard to imagine, because that article would never exist. No one would write, let alone read, such a ridiculous premise.