Snapchat for Dummies (I Mean, Parents) 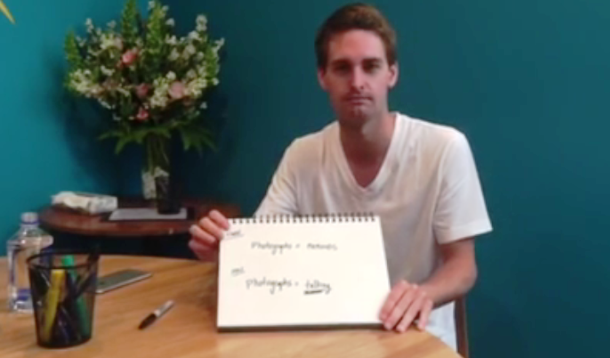 Between every generation there exists not so much a gap as a sinkhole. Inevitably, though some of us never thought it could happen to us, we are already looking at millennials and wondering what planet they came from.

Enter Snapchat's chief executive Evan Spiegel, to explain what makes these young people tick and explain for us old fogies (i.e. their parents) how his incredibly popular app actually works.

That Spiegel, who is just 25 years-old himself, appears in the low-buget video looking like he just fell out of bed proves the extent of our disconnect. (See, old fogies still expect to see their CEOs wearing something other than T-shirts and hoodies...)
And though it feels vaguely patronizing to see Spiegel with his flip notepad and simplistic diagrams, as parents we do need to understand how the whole ideology surrounding picture-taking has evolved since we first started accumulating and - gasp - uploading a hundred holiday photos at a time.

"When you see your children taking a zillion photographs of things that you would never take a picture of - it's because they are using photographs to talk," explained Spiegel. "That's why people are taking and sending so many pictures on Snapchat everyday."

Living in the moment, ephemerally, capturing an event in an almost comic-strip fashion as it happens as part of someone's "story"... That's Snapchat.
And I admit, it still feels foreign to my prehistoric brain. But at least Spiegel's "spiel" goes some way to explain all those estimated 750+ million photos users take on Snapchat every single day.