A negative into a positive 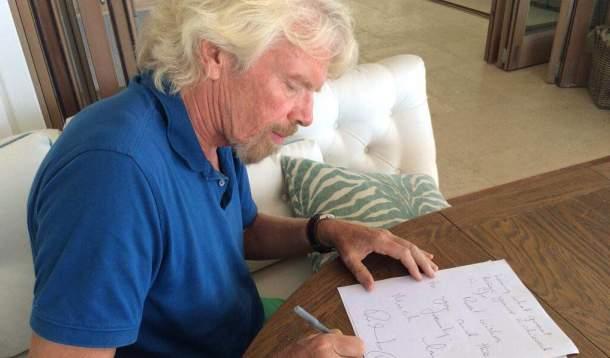 Not only is Richard Branson making the world a better place for his Virgin employees, but he is also supporting kids with learning differences. "When my perons (sic) told me I had dslexia," wrote a nine year-old girl, "I thort (sic) my life was ruined."

Of course Branson wrote back admitting that he actually viewed his own dyslexia as "a gift, not a disability. It has helped me learn the art of delegation, focus my skills, and work with incredible people."

He has often talked publicly about his learning challenges. "On one of my last days at school, the headmaster told me that I would either end up in prison or become a millionaire."

Talk about prophetic. The British billionaire may have dropped out of school at 16, yet that hasn't stopped him from being a visionary entrepreneur. He's in good company. So were Steve Jobs, Jamie Oliver, and the founder of Ikea, Ingvar Kamprad, who apparently named furniture items because codes were difficult to remember. And this graphic designer has even created a font that simulates what it's like trying to read when you have dyslexia.

You've heard of companies like CNN, Ford Motor Company, Hewlett-Packard, and Goldman Sachs? Yeah, they're all headed by people with dyslexia, too.

So for his part, Branson has been paying it forward, sharing videos about dyslexia under the #likeadyslexic hashtag.

Small wonder that he had this advice for nine year-old Honor:

"Don’t ever let people put you down for being dyslexic. Being dyslexic is actually an advantage and has helped me greatly in life. I look forward to hearing what great things you’ve achieved in life."

What an inspiration. Turning a negative into a positive. Now that's the kind of spin I can get behind.

RELATED: Free Resources For Children Who Have a Difficult Time Reading