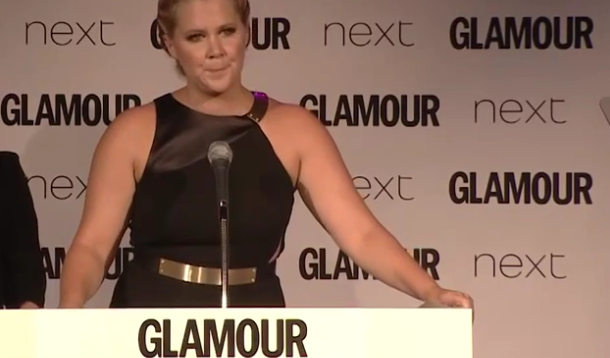 Amy Schumer is the current darling of comedy, and it's not hard to see why. Not only is she a badass in what remains an overwhelmingly a tough gig for women, but she's one who tells it like it is. Case in point, her rambling acceptance speech for the Trailblazer award at GLAMOUR's Women of the Year ceremony.

Like the late Joan Rivers, Schumer says what she pleases. Her NSFW comments about Jack-'o'-Lanterns and car air-fresheners are particular killers, even though they cannot be printed here. (But you MUST watch when you're safe from little ears.)

When asked if she feels out of place on the red carpet, Schumer balks, knowing she looks just as glamorous as anybody else there. "I'm 160 lbs, and I can catch a d*ck whenever I want. It's not a problem."

If you look past her extremely colourful language and sexual references, Schumer has some totally sound things to say about what it means to be a strong woman in a warped society. Much like Poehler and Wiig and Silverman, she's paving the way for unapologetic comedians. "Meek" is clearly not in her vocabulary.

But is she too raunchy to be considered a role model?

"I'm not going to apologize for who I am," Schumer said. "I'm gonna actually love the skin I'm in and not strive to be some other version of myself." She goes on to admit that she often uses women's magazines - some of which make you feel bad for "having a p*ssy" - as fodder for her comedy.