be my little baby 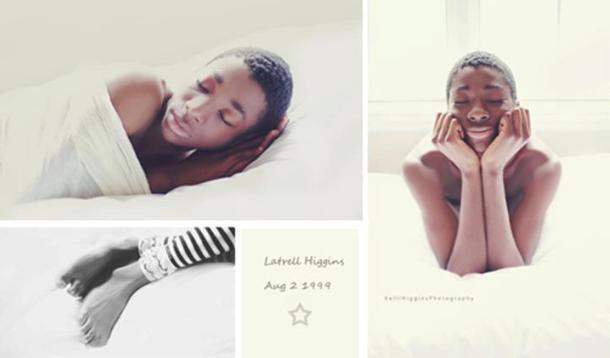 On the back of this spectacular retraction comes another birth announcement like no other. For a start, the "newborn" is 13 years-old!

Three years ago, mom and photographer Kelli Higgins and her husband were asked by a social worker if they would consider adopting Latrell and his five year-old sister Chayna. And even though Higgins was already mom to five other kids, she opened her doors - and her heart - with an emphatic, "Yes."

But it wasn't happily ever after and smooth sailing.

"We were all sitting at the dining room table talking about an upcoming newborn shoot that I had when Latrell looked sad and stated he had never had newborn photos taken of him," recalls Higgins. "My daughter Ally, who was 12 at the time, felt bad for him and jokingly said, 'why don't you do them [now]?'"

Higgins thought it was a brilliant idea. So did Latrell.

"He told me that it makes him feel special and loved, [and] when he was asked if he was embarrassed by it he said, 'No! I can still be your baby even when I'm 30!'"

The announcement was posted to the mom's Facebook page, where it racked up more than 5,000 shares. For Higgins, taking a viral photo was about more than a sweet gesture for her new son; it was a chance to raise awareness about adopting older children, who make up the bulk of foster kids in the U.S.

It takes time to build trust and love, but it's not just babies who deserve good homes with loving parents.