Royal Baby Madness: She has a Name! 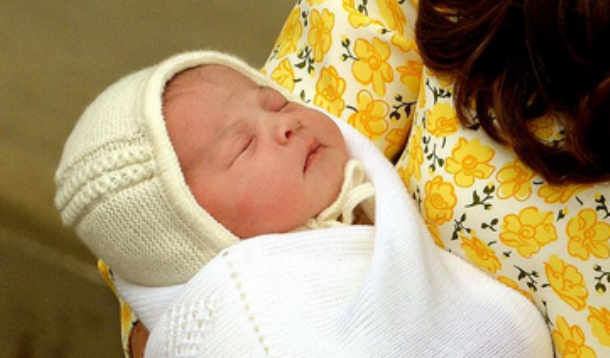 Will it be Charlotte? Or Alice, or maybe even Diana as a tribute to Prince William's late mother? Bookies were taking bets as the world remained positively giddy with the arrival of a new Royal princess this past weekend.  If you bet on Charlotte Elizabeth Diana, then you're in luck as the name has just been announced.

Even by Royal standards, media coverage got a little crazy, with static camera shots of the window at Saint Mary's where the Duchess Kate was giving birth (let's all stare at what's little more than a brick facade, shall we?) to timelines denoting key events—from the moment Kate went into labour (6am) to the exact moment of delivery (8:34am) and the displayed easel (3pm) to the official public appearance (6.12pm).

The new princess weighed 8lbs 3oz, that's 3oz less than big bro, Prince George. But do we need to know that kind of minutiae? Sure, a new princess is big news, for she is the first since Princess Eugenie came onto the scene in 1990.

But the fact that bookmakers even took bets on the Royal baby's name speaks to the insanity and inanity attached to all things Royal. Other contenders were Olivia (7/1) and Elizabeth (7/1) and Victoria (6/1). No Blueberry or September or any fruit or month of the year here. The Royals are sticklers for tradition and classic-sounding names.

RELATED: Duchess Kate Has Given Birth!

Though I also gave birth in England, all I could think about afterwards was having a hot shower and wolfing down a PB sandwich. No visitors, thanks, except for my husband... How vastly different our birth experiences were! Flooded with visitors, poor Kate had a dress and full makeup on, and a bazillion cameras all over her.

Yes, these are her "Royal duties," yet I fear we are guilty of feeding the beast when we expect live coverage. The public interest in the monarchy has frankly reached stalkerish and predatory proportions.
Just hours following her birth and already the princess' behaviour (well behaved by all accounts) and couture (white knitted shawl from G H Hurt and Son Ltd, knitted cream bonnet) were under the media microscope.
It's said that the princess will net the British economy something like £150 million a year though the copycat fashion and beauty products. She'll be worth a billion pounds—before she is even 10.

Jeesh. Give the Duchess some peace and privacy. I feel sorry for the wee Princess. As exciting as it is to welcome any new life, at the end of the day she is just a baby. And her mother is just a mom.
You tell me: Were you excited about the Royal birth or do you feel our interest in the monarchy is excessive?
Image Source: Twitter
Category:
Life - In The News
Tags:
mummy buzz
baby charlotte
royal
royal princess
princess
royal baby
kate middleton
monarchy
new princess
princess name
prince william
duchess kate
what is the new princess' name?