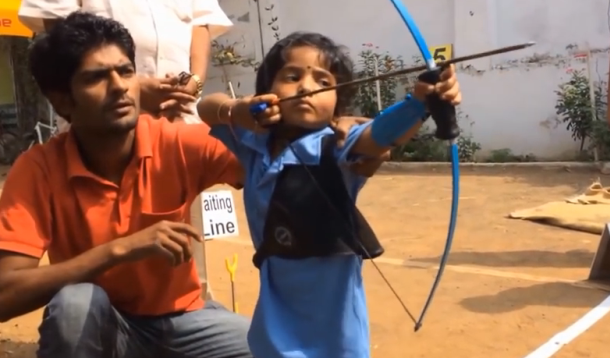 Just shy of her third birthday, a little girl named Dolly Shivani Cherukuri has broken archery records in her country for firing 36 arrows at a target five metres away, and then again at a distance of seven metres. The feat has made her the youngest Indian to "score more than 200 points at a trial event."

“My daughter achieved the feat we have been dreaming… I can’t express in words how happy my family is,” said Dolly's father, Cherukuri Satyanarayana about his daughter's success.

Yet the plot thickens (and gets a tad worrisome) when you learn she was trained in the sport "from birth" following the death of her brother, who was an archery superstar in his own right. From here, it smells like a vicarious victory for dad.

Though some have disputed Dolly's actual age, there is no denying that her accomplishment is staggering. Yet it begs the question: how young is too young to groom a child in a given activity?

In this country, many kids are fitted with skates and skis from the moment they can walk. While many parents may not have their sights set on the NHL draft, there does seems to be this push to give kids a head start on certain sports.

You tell me: Is it exploitative to engage a toddler or preschooler in a given activity or sport?