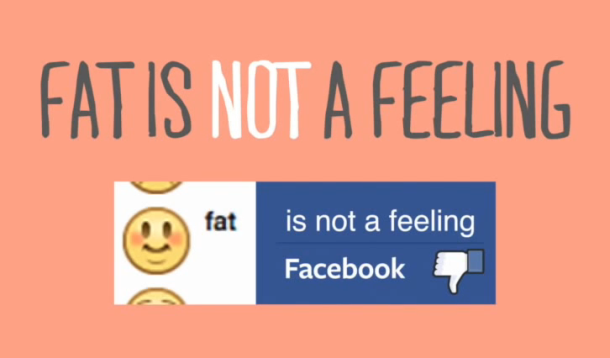 Do we take our emojis too seriously? Are we too sensitive when it comes to the little smiley face? More than 15,000 people think so, judging by the Change.org petition that is urging Facebook to drop its "fat" and "ugly" emojis from status updates.

Feeling "fat" and "ugly" are both currently listed among other emotions, like "amazed" and "discouraged." According to the body-positive group, Endangered Bodies, the smiley face icons promote body-shaming and foster "self-destructive thoughts."

Simply by virtue of adding the portly or hideous smiley face, users are inadvertently poking fun at people.

The emojis are yet another seemingly minor way in which we are made to feel bad about our bodies.

"Fat is not a feeling," reads the petition. "Fat is a natural part of our bodies, no matter their weight. And all bodies deserve to be respected and cared for."

(Clearly these people have not experienced the post-Thanksgiving dinner phenomenon.)

Personally, I do not put much value in the power of emojis, yet as a writer I understand—and am continually humbled by—the power of words. Choose the wrong word, or omit another, and you risk skewing the entire message. Maybe it's the same with smiley faces.

After all, with 100 preset feelings to chose from, maybe feeling "full" after that big turkey dinner should be the obvious and only choice.

So, while the existence of such petition seems at face value ludicrous and petty, I'm willing to concede that it is utterly necessary.  Then again, as people we still wield the ultimate power to put ourselves down. We don't need the help of emojis to do that.

You tell me: Do the emojis we use matter, or is this the most petty petition ever?