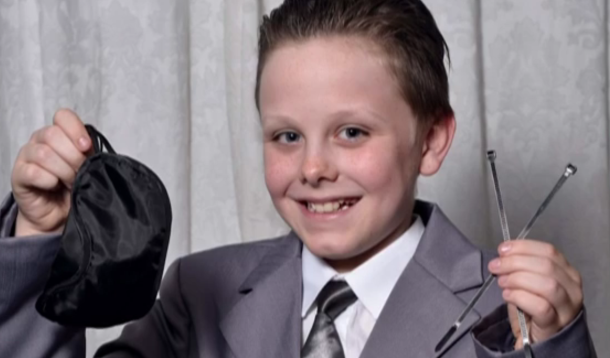 In honour of World Book Day, Liam Scholes thought it would be fun to dress up as Christian Grey, complete with eye mask and cable ties, for his school celebration.

How is it that an 11 year-old even knows about the bondage lord of fiction?

As the all-time biggest bestselling novel in Britain, it's hopelessly naive to think that children don't have some basic awareness of Fifty Shades of Grey, if not of its actual explicit sexual content.

Needless to say, the Manchester school wasn't impressed, and insisted that Scholes adapt his costume to pay homage to a different fictional character—James Bond—if he wanted to participate in the planned festivities. Trouble is, how is a murderer and serial womanizer an improvement on Grey? Scholes' mom, herself a teacher, "agreed to disagree" with the school, and recoiled at the obvious double standards of its decision.

17 Great Movies to Watch with Your Teenager

In aiming to promote and encourage reading, it seems the school missed the moral of the story. Headteacher Lynn Nicholls defended "the school’s high standards in terms of student behaviour, welfare, and safeguarding."

Um, really? So while Grey was strictly off limits, James Bond was OK. There were various witches and warlocks on show. And it was somehow deemed acceptable for a teacher to dress up as blood-splattered Dexter. How is a serial killer considered a safer bet than a sexual fiend? Beats the hell out of me (sorry).

Aren't there plenty of age-appropriate heroes and heroines to choose from (Hello Potter! Hello Herimone!) without resorting to an adult catalogue? Maybe school officials need to go away and read a few more children's books before the next event...

You tell me: is dressing as a fictional character harmless fun, or do these educators need schooling in what's appropriate?