PETA Rips into Sarah Palin Over Dog Photo on Facebook

All about a pooch 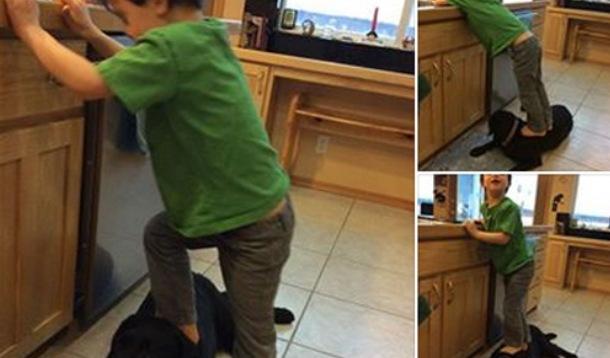 Well, these are words I never thought I'd write: I agree with Sarah Palin. A Facebook post by the former U.S. vice presidential candidate raised the hackles of animal rights org, PETA. It was all over an image in which Palin's son, Trig, used the family dog as a stool at the kitchen sink.

PETA's resolution for 2015 should be to pick their battles wisely. I mean, really, is there no worse crime against animals going on in the world right this very second than a boy momentarily stepping on the "lazy dog" blocking his way? No, they choose to pick on Sarah Palin because hey, who doesn't like to pick on Sarah Palin? And most times she has it coming.

Would You Eat This Burger?

But in this case, PETA is in the wrong. Fact one: Trig has special needs. Fact two: that dog is a service dog and Trig's best friend.

Anyone with a family pet can acknowledge the fact that young children will on occasion pester said pet. It's up to us parents to teach our kids acceptable ways to interact with their furry friends, i.e. dogs/cats don't like having their tails yanked. Having said that, any pet genuinely threatened will make their needs known pretty quickly.

If you took photos of my son "playing" with our bulldog over the course of the day, some would definitely incriminate him. In one shot he (40lbs) might be piled on top of her (60lbs). In another, she might be slobbering all over his face. Him burrowing into her fur, and so on...

The UGGly Story Behind UGG Boots

Perhaps it was naive of Palin to post the photo as a talking point for resolutions. In the end, though, the attention has actually worked in her favour—likely drawing awareness and attention to the organization that trains service dogs like Trig's:

"These dogs can change a disabled vet's life and that's a beautiful thing!" wrote Palin. "Certainly the Puppy Jake Foundation has changed our life for the better. I am in love with this four-legged family member! ... I hope the foundation is overwhelmed with support from caring Americans now so that good comes from PETA’s bad acts in this."

Sorry, PETA, but this was your bad. Now, go protect some animals who are genuinely in danger.