Elizabeth Lauten Needs to Relearn the "ZIP it" Rule 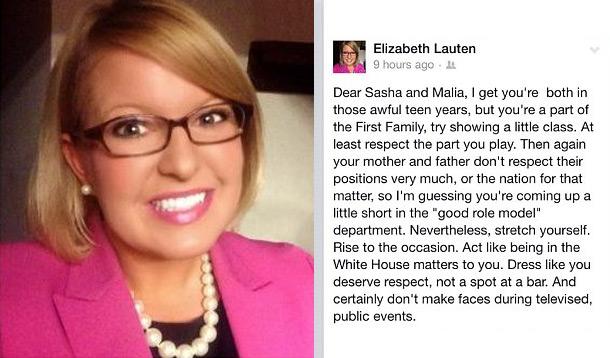 Who's the turkey now? Elizabeth Lauten may soon find her neck on the chopping block after throwing major shade at President Obama's teenage daughters, Malia and Sasha, during the Thanksgiving address.

No, Lauten is not a panelist on the Fashion Police, but the communications director for Rep Stephen Fincher:

"I get you're both in those awful teen years, but you're a part of the First Family, try showing a little class," read her Facebook post. "Act like being in the White House matters to you ... Dress like you deserve respect, not a spot at a bar." Lauren also went on to attack the President and First Lady for not being role models.

Ouch. Taking a pit shot at the President's kids? Now that's the definition of classy. What pray tell were the girls wearing, bustiers and stockings? So what if they forgot their string of freshwater pearls that day. So what if they looked a little bored by the whole turkey affair. They are teenagers. I'd be more concerned if they were really psyched by what is—let's face it—a pretty lame tradition. In fact, I'd argue that the Obamas are doing something very right with their daughters. Also, it doesn't even matter. The clothing choice and facial expressions of children - not your own - is NOT YOUR BUSINESS, MS. LAUTEN.

"We don’t talk about weight. We don't talk about physical appearance," Michelle Obama said in an interview. "We talk about health. We talk about what's on the inside. We spend so much more time talking to our girls about being kind and treating others well, and being passionate and respectful."

Mercifully the internet, with its elephantine memory, kindly reminded Lauten of the "class" displayed by former head George W's Jenna Bush, which included sticking her tongue out at photographers, and drunken frolicking that earned her the 'Jenna And Tonic' nickname. But still, Ms. Bush was a teenager at the time and she too should have been left to live her formative years sans comment from political critics. If and when a Presidents children are legal adults AND enter politics themselves, then you can say your piece. Until then? ZIP.

Additional memo to Ms Lauten: class has more to do with how you act than what you wear.

One thing led to another and #FireElizabethLauten gained momentum, with tweeps calling for her to be fired. Of course Lauten issued a paltry sorry on Facebook, saying "judgmental feelings truly have no place in my heart" and that "hours of prayer" had cured her of her wicked ways.

But users were not assuaged, since Lauten's entire Facebook page seems to be one giant exercise in judging and condemning others. She's not the only one. Politics is increasingly about attacking people instead of attacking policy. Even in so-called civilized Canada, the latest election campaigns were filled with smear. The focus less on tackling issues than about bad mouthing the next guy. True leaders don't have to resort to slander and potty talk.

I have a pitch for a new TV show. It's called What Not To Say. Maybe Lauten can host. I have a feeling she'll be looking for a new job soon enough...

Update: It appears Lautens would have time to star in the show. She's resigned her position from to GOP.