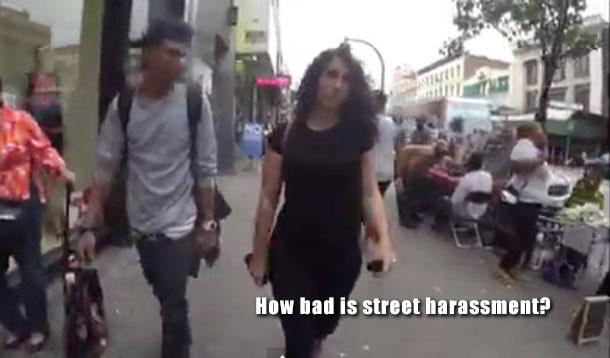 Think a woman can walk down a street in broad daylight without being hassled? Think again. When you think about sexual harassment, you may think about women being groped or fondled, but harassment can take many forms. In this video created by the non-profit Hollaback!, a young woman proves that "exhausting sexism," as Jezebel calls it, happens every single day in the most mundane situations.

In fact, over a 10-hour period the sheer number of times the woman had comments directed at her is staggering. It's gut-churning, honestly. And the whole time she is just walking through the streets of New York. She's not dressed provocatively (not that what she's wearing even matters).

Not once does she talk back, make eye contact, or even acknowledge the hecklers, yet for some reason these men all feel they are within their rights to either acknowledge her beauty or demand that she interact with them. Their persistence is galling. They falsely assume that they are paying her a compliment and for that she should be grateful. Ugh.

One man even deigned to walk alongside her for several minutes. At this point, while watching the footage, I actually started to feel uncomfortable and concerned for her safety.

And just for the record, the men who did this to her came from all backgrounds and a host of neighbourhoods.

I've always been a fairly conservative dresser. Though I'm past the age where men outwardly pay me much attention, if I'm honest, I know that part of the reason I dress the way I do has to do with comfort. But the other part has to do with keeping unwanted attention at bay.

On days when I chose to wear a skirt or dress, I could feel the difference instantly. And because I didn't like to be ogled, it was just easier to wear pants most days. I wonder how many other women feel the same way.

Some men truly don't think they are doing anything wrong when they address women this way. They need to know that this kind of attention is not flattery, it's harassment. And it has to stop.

This dad is fighting the good fight, for his daughters' sake.