Sometimes it doesn't take a village at all 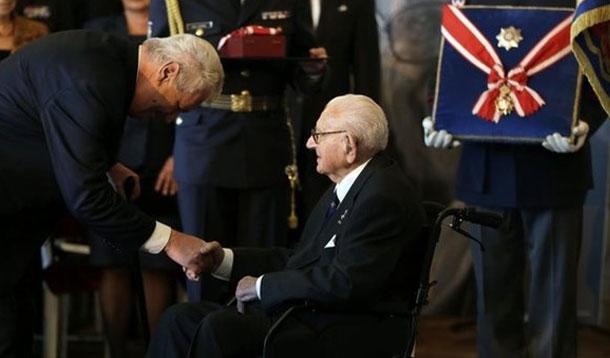 Remember the film Schindler's List? Well, it seems there was not only one real life Oskar Schindler, but several Schindler types. One such man was Sir Nicholas Winton. The Briton, who rescued 669 children from certain death, is finally being honoured in the Czech Republic for his brave feats during the Second World War.

Hard to believe, but Sir Winton was a mere 29 when he organized trains to take Jewish children from Nazi-occupied Czechoslovakia to meet foster families in London.

At 105, Sir Winton will be awarded the Order of the White Lion in Prague. Why has it taken so long to honour this man, you ask? Incredibly, his actions weren't discovered until the late '80s when his wife stumbled across his scrapbook.
He kept what he did a secret for 50 years. And what he did was remarkable. He knew the situation was grave, having been to refugee camps outside Prague, yet he reacted at a time ruled by fear and uncertainty.

A stockbroker at the time, Sir Winton organized eight trains in total. The ninth, which contained the most children, never made it through. He knew that without his help the children had no chance at survival, yet he downplayed his actions because "that's what was happening all over Europe."

At the forthcoming ceremony, Sir Winton will meet some of the "children" he rescued 75 years ago. He met others when he was knighted by the Queen in 2003. Below is footage of a 1988 BBC programme in which he was reunited with some of those children.

What do you say to a stranger you owe your entire life to? The saddest/scariest part of the story has to be the fact that Sir Winton doesn't think "we've ever learnt from the mistakes of the past..."
Be that as it may, we can learn so much from this man's courage in the face of present danger. Sometimes it doesn't take a village; sometimes all it takes is a single person.
File this one under inspiration, folks. Lest we forget.
Our kids are never too young to learn about Remembrance Day.
Category:
Life - Celebrate
Tags:
mummy buzz
#remembranceday
poppies
remembrance day
war hero
nazi
takes a village
inspiration
sir winton
schindler
schindler's list
save children
Hero
second world war
real hero