Why We're All To Blame For The Ray Rice 'Scandal'

Who's the real offender? 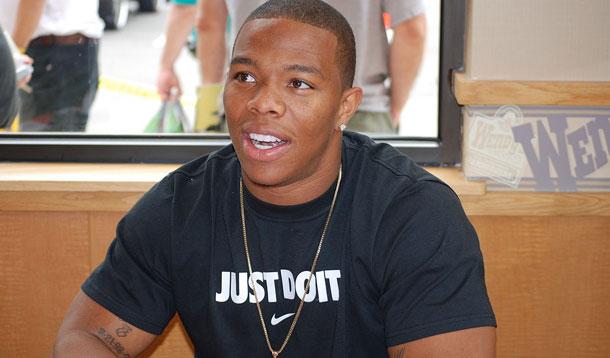 If you've been following the whole Ray Rice scandal, you'll know that the footballer has been fired and banned by the NFL for abusing his wife. What's even more shocking is that Janay, who was knocked unconscious in an Atlantic City elevator, was the first to rush to his defence.

"No one knows the pain that the media & unwanted options from the public has caused my family," wrote Janay on Instagram. "To make us relive a moment in our lives that we regret every day is a horrible thing. To take something away from the man I love that he has worked his ass of for all his life just to gain ratings is horrific."

TMZ Sports initially released the video (which I won't share here), though the full footage from the casino elevator is in state custody while police continue to investigate the case.

It's truly awful that Janay Rice is the victim of domestic assault, and I pray that she finds her way out of a relationship that can only be destructive. Yet are we equally reprehensible for watching the drama unfold? Is the media, as she claims, the real offender for intruding on the private business between two people?

Celebrities deserve privacy. But when their battles take place on centre stage, as with the Jay-Z/Solange riff (what is about elevators, anyway?), then they might as well be on an episode of Candid Camera. It may not be fair or right that a couple's dirty laundry has to be aired in public. However, couldn't it also serve as a greater discussion point about domestic assault?

Countless women are abused at the hands of "the man they love" every day. Like Janay, too many wives and girlfriends race to defend the person who hurts them the most. Are these men fired from their jobs? Of course not.

Do people in the public eye have a social responsibility that extends beyond their sporting or artistic prowess? The fact that Rice is a wife beater may not make him a very nice guy in my eyes, but does it affect his ability to catch or throw a ball? Nope.

Unless he finds himself behind bars, I'm not sure that it's helpful to throw him out of a sporting league. If all his teammates were measured for their moral fibre, many would surely come up wanting.

Editor's Note (added September 17): After reading several comments, it became clear to me that this post failed to clearly articulate my viewpoint and so I wish to make it expressly clear that I do not condone abuse of any form. What Ray Rice did was a crime, and it should be punishable by law. I'm happy to note that the NFL subjects its players to a code of conduct. But quite simply, it's not only sporting figures like Rice and Adrian Peterson who should be shoved under the moral microscope, as if the rest of us are somehow infallible. Countless men and women are abusive. Are they fired from their jobs? Rarely. Do they deserve to be held accountable for their actions? Of course.

The media has an unfortunate habit of making a spectacle and a 'scandal' out of a celebrity's darkest hour, and Rice's case was no exception. However, if all the coverage opens up a greater discourse about assault—and if it helps some women get out of a destructive relationship or protects vulnerable children—then perhaps that makes it worthwhile.

We were stunned and saddened to see this celebrity publicly attacked by her husband.