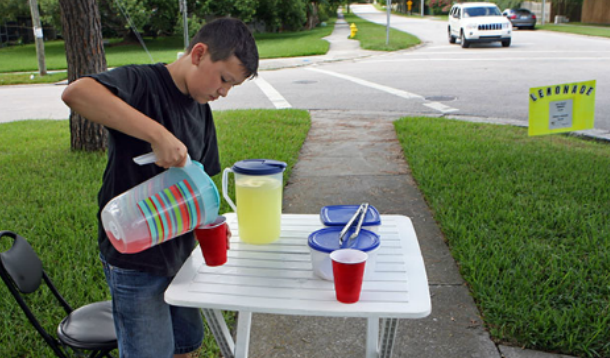 A Florida man called police on his neighbor recently, and because nothing wacky ever happens in Florida, the incident didn't make the news and everything was settled amicably and... OF COURSE NOT IT'S FLORIDA. The heat and humidity does something to a person after a while and that may explain the cranky-pants outlook of 61-year-old Doug Wilkey, the Dunedin area homeowner who called police to complain about 12-year-old neighbor T.J. Guerrero's lemonade stand.

Wilkey has called law enforcement officials and city administrators on numerous occasions over the past two years to have the stand shut-down, but this year he got ALL-CAPS mad when he wrote an email containing the word "AGAIN!!!!!" in several places. I'm not sure where you're from, but 'round these parts we take it very seriously when someone uses more than quadruple exclamation points.

The Tampa Bay Times reports Doug Wilkey as saying the lemonade stand is "an 'illegal business' that causes excessive traffic, noise, trash, illegal parking and other problems that reduce his property values." While most 12-year-old would counter that claim with armpit fart noises, Guerrero instead says he has the rest of the neighbors blessings — including permission from one who allows him to place a sale sign on his corner lot. Two additional neighbors allow beverage-seeking customers to park in their driveways when necessary. In fact, when questioned by law enforcement brought to the scene, no one had a problem with the stand or its proprietor.

Guerrero tells reporters that he runs his stand to "save money for an iPod, snacks, his cell phone bill, trips with his grandfather and dinners with his mother." Now what kind of horrible child wants to earn money to buy his own electronics and food for his mother. What sort of monsters are the Florida suburbs churning out, exactly?

Dunedin city officials don't seem too concerned: "We're not in the business of trying to regulate kids like that; nor do we want to do any code enforcement like that. We are not out there trying to put lemonade stands out of business."

I can see how a year-round anything stand could be a nuisance, and if Wiley's claims of loud profanity and traffic jams are found to be just, then there is a problem. But if 12-year-old Guerrero is anything like most 12-year-olds I know, that lemonade stand will taking up garage floor real estate and gathering dust as soon as he hits puberty and his thoughts turn, um, elsewhere. And because other neighbors don't seem bothered by the lemonade stand, it's harder to take Wiley's complaints seriously.

Still, if your kids like building blanket forts and you've got a less-than-friendly neighbor, you may want to make sure you've got all the proper building permits from city hall before they hang their first sheet.

Julie Green is away August 25 - 29, and during that time MummyBuzz will be written by me, Jeni Marinucci (Panic Button Years).