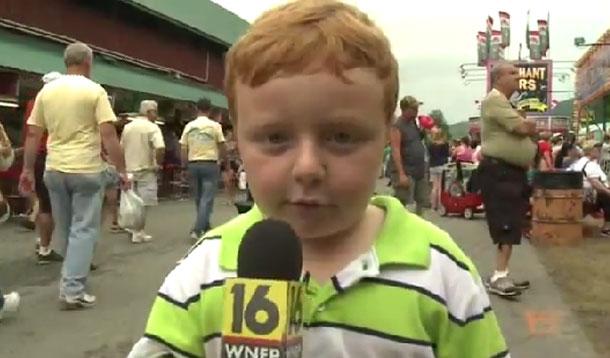 You may not know Noah Ritter by name, but the pint-sized wonder is all over the internet, apparently. When the five-year-old boy from Pennsylvania attending the Wayne County Fair was interviewed by a local TV station, he saw his golden opportunity and ran with it.

According to an article in Today, WNEP Newswatch 16's Sofia Ojeda innocently asked him what rides he'd been on. But Noah, now known as the Apparently Kid, had a whole lot else to say.

With the mic in his hands, he announced that, "Apparently, I've never been on live television before. But apparently I don't watch the news because I'm a kid and apparently Grandpa just gives me the remote after he watches the Powerball."

Little Noah hasn't even started kindergarten yet, but I give it a day or so before he gets an invite to sit on Ellen Degeneres' couch. Some kids have all the luck.

His monologue had three million views at the time of writing, but you can still see it below. Apparently, it's awesome.

These tots went viral and they didn't even know it.