Wondering what to do with all that Rainbow Loom once your daughter's obsession wanes? 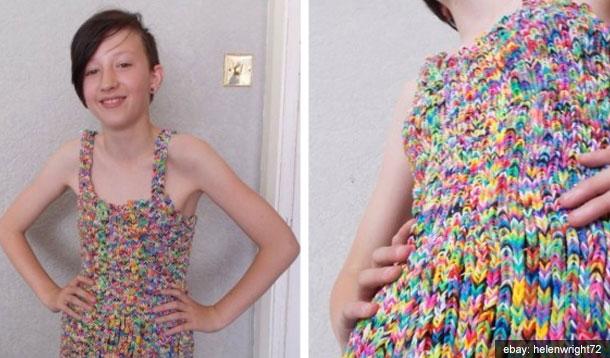 Wondering what to do with all that Rainbow Loom once your daughter's obsession wanes? A Welsh mom turned a hobby into cold hard profit, having created a dress out of loom and nothing but loom. Subject to a bidding craze on eBay, the dress eventually sold for more than $200,000.

According to an article in the Huffington Post, single mom Helen Wright got the idea for the dress after creating loom projects with her 12-year-old daughter.

Because Wright's friend, Katherine Burnand, was out of work and "bored" at the time, she took up the actual weaving.
"I said why don't we make a dress from loom bands and Katherine said she'd be happy do do it because she's too ill to work," said Wright. "[Katherine] did an hour here or there in between her house work to keep her busy."
I'll say. Despite having arthritis, Burnand spent more than 40 hours putting the dress together. Some 20,000 loom bands later, the dress went up for auction on eBay for a modest $85—enough to cover costs.

The moms reasoned that if they made anything extra, they could "have a day out."

Well, when the auction ended on Tuesday, the dress garnered some 137 bids and sold to the highest bidder at $291,000.

"I'm still in shock and I can't believe it," said Wright. "I still won't believe it until…the money is in the bank."