We thought [the photo] would be cute 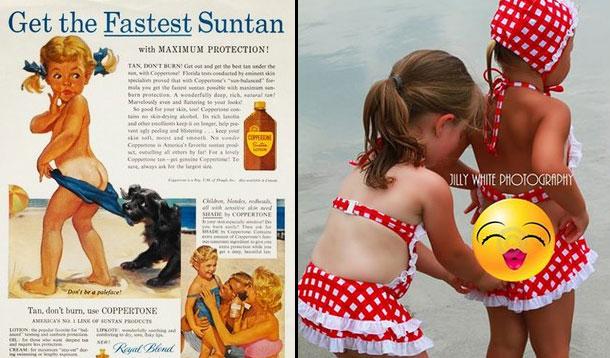 The mom/photographer who posted a re-creation of the classic Coppertone beach ad of her 'cheeky' toddler has cause to celebrate after Facebook agreed to reinstate her account.

According to an article in the CBC, Jill White paid homage to the sunscreen ad in which a dog playfully tugs at a little girl's bathing suit, exposing her bum.

"I posted [the photo] on Coppertone's [Facebook page]," said White. "We thought it would be cute because of the old Coppertone ad and her tan line looked like that."

But then, in the year 2014, such a photo is no longer regarded as cute or innocent by social media standards. Facebook ultimately revoked White's account for 24 hours. She was apparently given three options by the site—delete the photo, change her privacy settings, or ignore the warning.

White wasn't willing to back down over a photo that she did not consider offensive. (Facebook claimed the photo was in violation of its nudity policy.)
During the ban, White lost access to her business page, and inserted a cartoon face over the contentious bottom.
"It is hard being a photographer to change your privacy settings to FRIENDS ONLY, so I have to be a PUBLIC person," White wrote on her Facebook page. "I am not ashamed in anyway of WHO I AM or what I do. I will continue to post and be the person I know I am. I will not let anyone get the best of me and I will always fight for what I believe in."
Facebook does not make exceptions when it comes to nudity involving minors on its site.