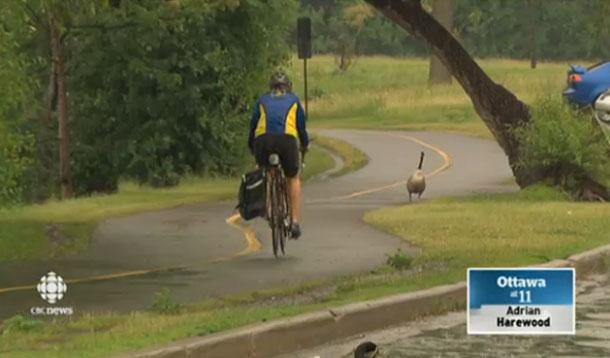 A cyclist suffered facial injuries and a concussion after being attacked by a Canada goose.

According to an article in the CBC, Kerry Surman was riding along the Trans Canada bike trail in Ottawa when she encountered a family of geese.

Assuming the path was clear, Surman continued along her way.

"What I remember is the goose giving me the evil eye and then the goose wrapping its wings around my head, and I can't see and I hear myself screaming."

Like a scene out of Hitchcock, Surman then found herself on the ground, unable to get up. She wasn't sure how long she was unconscious. Eventually a passerby called an ambulance.

Surman spent a total of five nights in hospital after the attack left her with a "concussion, fractured cheekbone, face lacerations including a scar under her eyebrow and loose teeth."

While the incident gave her a "healthy respect for nature," Surman admits her injuries could have been much worse had she not been wearing a helmet and sunglasses.

The Ontario Ministry of Natural Resources recommends exercising caution, particularly with children, around geese. If threatened, these birds can be highly aggressive.

Have you ever had an altercation with geese or other birds?
This mom did what she had to do to save her daughter from an aggressive dog.
Category:
Life - In The News
Tags:
mummy buzz
geese attack
geese
Canada Goose
goose
birds
bird attack
cycling safety
kids safety