My Little Rifle Series Photographs Children With Their Guns

What do you think of these photos? Is it ever acceptable to allow children to have guns? 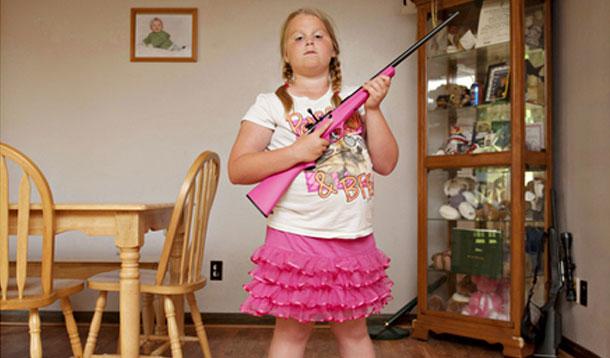 America, you love your guns. And you love your children. But they do not mix. Not that you would know it from perusing the line of guns marketed specifically for children by a company called Keystone Sporting Arms, which produced some 80,000 such guns in 2008 alone.

According to an article in the Guardian, the guns come in a rainbow of assorted colours with cute names, like 'Cricket' and 'Chipmunk.'

When Dutch photographer An-Sofie Kesteleyn stumbled across a story about children and their guns, she decided to travel to the southern States to visit these families firsthand to find out what makes them tick.

The result—a series of 15 portraits of children proudly clutching their own guns that offers a fascinating glimpse into the window of gun-loving culture as it seeps from one generation to the next.

Kesteleyn also interviewed the families as part of her series, and found a lot of fear. "The children have childlike imaginations and the usual childhood fears—zombies, monsters and wild beasts. They are not born with these adult fears; they are infected with them."

Most shocking is the juxtaposition between the innocence and domesticity of the photos, all shot (forgive the pun) in the children's bedrooms alongside other toys, while the kids clutch a real weapon capable of taking lives.

Of course the adults stress the need for protection, and most are well-intentioned and loving parents. But accidents do happen—with predictable frequency. Take the tragic shooting of a two-year-old girl, shot and killed by her five-year-old brother from a children's rifle.

What do you think of these photos?

Another highly objectionable children's product that wouldn't be necessary if guns were controlled or, better still, outlawed.