. . . And your father is your boyfriend 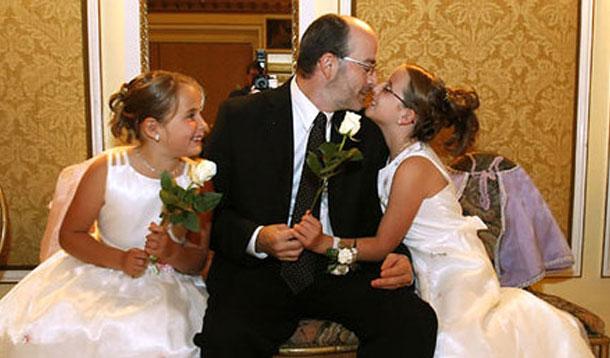 Forget prom and homecoming. Purity balls are a special celebration sweeping across most of the U.S. and almost 20 other countries, in which girls symbolically offer up their virginity for safeguarding by their fathers.

According to an article in Parentdish, the ceremonies typically involve girls as young as seven in white gowns pledging to hold off on having sex until marriage.

As a symbolic gesture, the dads present their daughters with "purity rings" during the balls, which conclude with a father-daughter dance. A far cry from how this teen planned to lose his virginity.

Apparently, the ceremonies have their origins in the 1980s. A documentary on the subject depicts a pastor telling one of the girls, "So you keep this [ring] on your finger and from this point you are married to the Lord and your father is your boyfriend."

Err, what? Abstinence is clearly still synonymous with morality in some religious communities. And in many traditional weddings, fathers still "give away" their daughters.

So, is this phenomenon super creepy, verging on incestuous, or simply part of an ongoing religious custom? Does the purity movement, by extension, imply that sex is a 'dirty' deed?