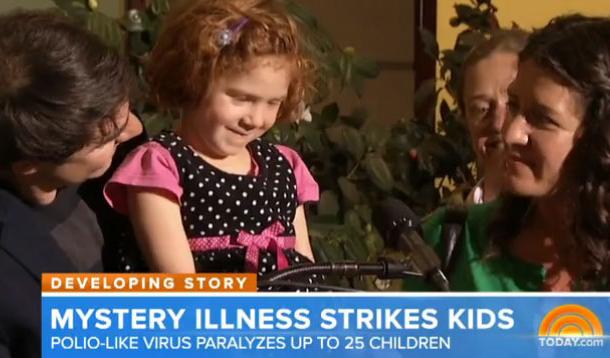 What is this mystery illness that is plaguing children in California? That's what researchers from the University of California, in San Francisco, are trying to determine after some 25 children in the state experienced a polio-like virus that left them with paralyzed limbs.

According to an article in NBC News, the virus is thought to be a type of enterovirus similar to that of polio.

The sudden paralysis, which has affected kids between the ages of two and sixteen, apparently began with flu-like symptoms and shortness of breath.

The MRI of one toddler revealed a spinal cord lesion responsible for the paralysis that caused her to lose mobility in one arm.

Her parents insist their daughter is otherwise thriving. Officials are urging people not to panic about the virus that has affected children in various parts of the state since August 2012.

“We want to temper the concern because, at the moment, it does not appear to represent a major epidemic,” said Dr. Keith Van Haren, a pediatric neurologist at Stanford University’s Lucile Packard Children’s Hospital. “[The Centers for Disease Control and Prevention] is taking these reports very seriously. We hope our efforts will help us develop prevention and treatment strategies in the future.”

Interestingly, though the virus shares similarities to polio, all the children involved were vaccinated against the illness. Parents are advised to seek medical attention if children display sudden limb weakness, with or without other symptoms.

Some vaccine-preventable outbreaks around the world.