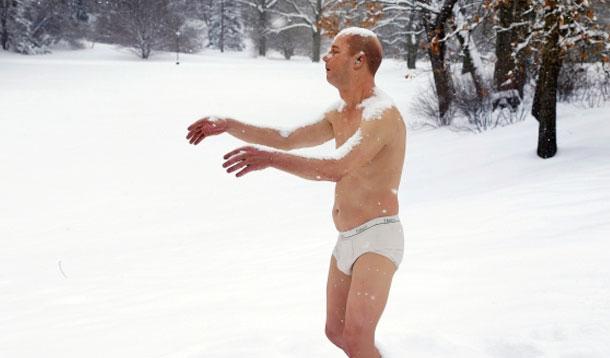 Uncannily lifelike in nothing but a pair of "tighty whities," a statue is haunting some students at a women's college in Massachusetts.

According to an article in the Toronto Star, a petition is circulating Wellesley College to have the statue of a sleepwalking man scrapped from campus.

The petition, with more than 650 signatures, claims the statue is a “source of apprehension, fear, and triggering thoughts regarding sexual assault.”

But it seems like a case of potato/potahto between students and officials.

“The very best works of art have the power to stimulate deeply personal emotions and to provoke unexpected new ideas, and this sculpture is no exception,” wrote President H. Kim Bottomly and museum Director Lisa Fischman in a joint statement.

They further claim the statue has "started an impassioned conversation about art, gender, sexuality and individual experience." A conversation alright.

“This could be a trigger for students who have experienced sexual assault,” said student Bridget Schreiner.

I don't know about you, but the idea of a nearly naked man with his arms outstretched like he's coming to get me doesn't strike me as the least bit artistic. He is realistic, though, with that part-zombie, part-somnambulant pose, and maybe that's part of the problem.