The Other Reason Cameron Diaz Was Photoshopped 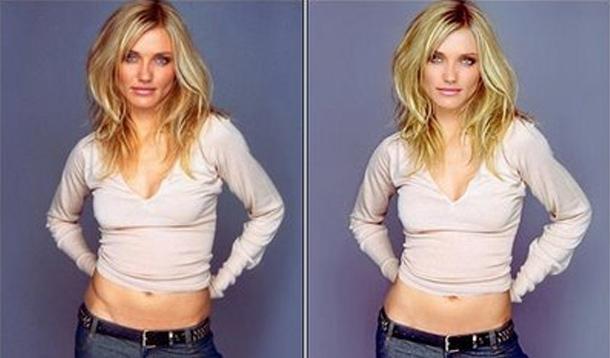 Much has been made of how the fashion industry manipulates images of beautiful women. Typically, Photoshop is deployed to shave inches off hips and thighs, but a former Cosmo editor has spilled the beans on an altogether different—yet common—form of deception from which even the likes of Cameron Diaz wasn't immune.

According to an article in the Huffington Post, Leah Hardy recently revealed before and afters of Diaz, in which the actress was more or less "filled out" and made to look less skinny.

Similar stories have come out about editors who've retouched models and stars who looked rakish and unwell.

And so the mythology of the perfect woman continues as skeletal models and celebrities struggle to stay thin (but not too thin) for the lens.

No wonder Jen Lawrence opted to look chubby on screen and "normal" in everyday life—whatever normal is, but we take her point anyway.

Will we ever see a natural woman again on the cover of a magazine, or is the illusion necessary to give us something to aspire to?