Why Every School Yard Needs A 'Buddy Bench' 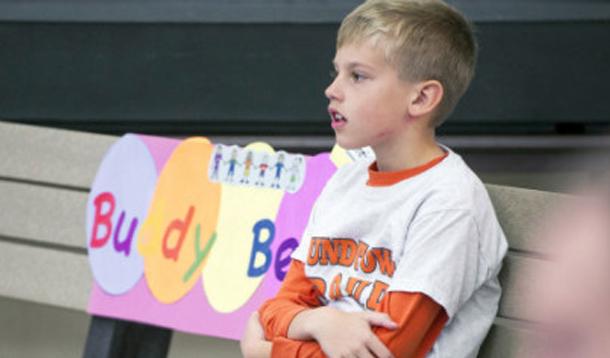 Have you heard of the Buddy Bench? Neither had I. But thanks to the work of a second-grader featured on the Today show, with any luck the bench will one day come to schools near you.

According to an article in YDR, Christian Bucks first noticed the buddy bench while surveying international schools in Germany, where his family was considering a work-related move.

The concept behind the bench is simple: kids feeling lonely or left out on the playground sit on the bench, sending a clear message to other kids that they want to talk or play. Two kids who find themselves on the bench at the same time can initiate an interaction, maybe even spark a friendship.

Immediately Christian knew his school, Roundtown Elementary, needed a buddy bench. He approached his principal, Matthew Miller, who showed no hesitation in ordering and allowing Christian to customize the seat.

"We encouraged and supported him every step of the way," said Christian's mom, Alyson Bucks, "but it was the Roundtown faculty and staff who brought the idea to fruition. We are so thankful for their support in embracing this idea."

"I also hope that new friendships will be made because of the buddy bench."

What a wonderful step to combat the bullying and isolation that drives many great kids to despair. The simplest ideas are sometimes also the most effective.

Principals, board members and fellow parents: if you're reading this, let's get a bench put in every school in every district.