Dad's Lunch Notes To His Children Will Inspire You

From the brown bag into the mainstream 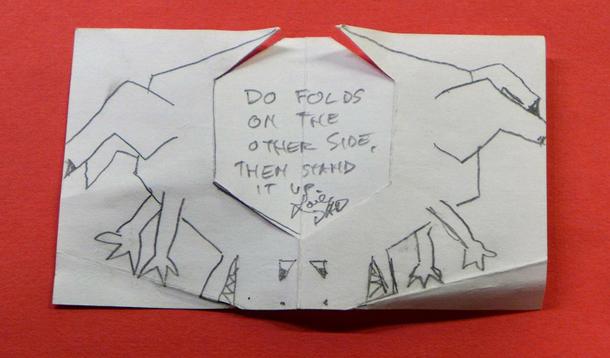 Though he calls them "dorky," we prefer to call And I'm the Dad's efforts unbelievably cool after the blogger's lunch notes found their way out of the brown bag and into the mainstream.

According to an article in Mashable, as the chief lunch maker in his household, Dad started sneaking notes into his son's lunch back in 2012 to cheer him up when he was going through a bit of a rough patch.

Of course we have no doubt that the notes—part doodle, part origami, 100% from the heart—brightened his kid's day.

Dad also makes his wife and daughter notes of their own, though they take at most five minutes, and it's not something that happens every day.
"The notes are influenced by several things," he said. "Sometimes it's a topic we discussed that morning or the night before. Other times, it might be along a theme, like the alphabet series I did for my daughter, who is in kindergarten and still learning to read."

I'm partial to the notes with hidden, uplifting messages, while Daddy's girl is most taken by drawing of Hedgie, the hedgehog from Jan Brett’s books.
And here's to another dad who totally inspired us with his originality and cunning.