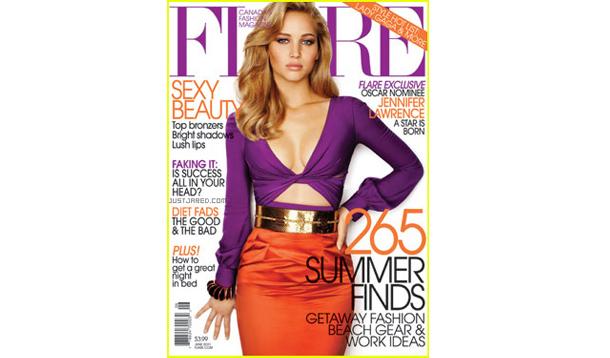 How do you improve on perfection? It's a question many people are asking after a back issue of Flare magazine re-surfaced, in which an already gorgeous Jennifer Lawrence was significantly Photoshopped, according to an article in the Huffington Post.

The fashion industry knows no shame when it comes to airbrushing, as the GIF dating back to J-Law's June 2011 cover shot revealed. In it, the American Hustle star's photo underwent several modifications, including trimmed down hips, and shaved collarbone and cheekbones.

Of all people, Lawrence is the first to speak out against our Photoshop-happy culture, saying about her recent Christian Dior ads, "That doesn't look like me at all."

"You have to see past it," Lawrence told Yahoo's CEO Marissa Meyer in an interview last month. "You look how you look, you have to be comfortable. What are you going to do? Be hungry every single day to make other people happy? That's just dumb."

Dumb but rampant. Sure this doctored cover is years old now, but has anything really changed in the business since then? This video really opened my eyes. The more I see, the less I believe.