You will never look at a banana the same way again 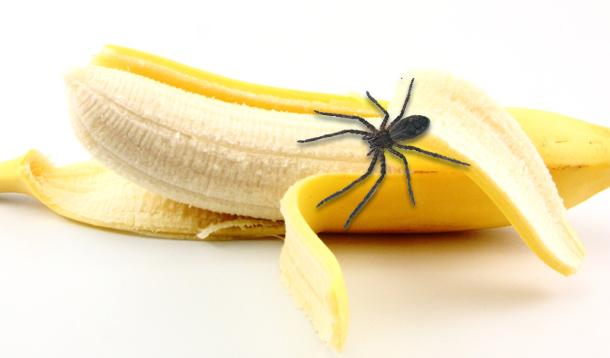 You will never look at a banana the same way again—guaranteed—once you read about the unexpected discovery a British woman made when she was about to peel the imported fruit.

"I thought it was mold," said Consi Taylor, a twenty-nine-year-old Londoner, of the white spots she noticed on her banana. "[B]ut when I had a closer look I saw some funny looking spots...and was horrified to see they were Brazilian Wandering Spiders. They were hatching out on the table, scurrying around on my carpet."

Incredibly, the story gets worse. According to an article in Gawker, Taylor was offered a measly £10 ($16) when she returned the fruit to Sainsbury's supermarket.

Then she sent a photo of the spiders to a pest control outfit, only to discover she was dealing with so-called banana spiders from Brazil, rated as "the most toxic" and dangerous arachnid by Guinness World Record standards.

Taylor was told to get her family the "hell out of the house and never look back" until the fumigation was complete. Sainsbury’s were decent enough to stump up the cost of the extermination, and pick up the hotel tab while the Taylors were temporarily homeless.

This, after reiterating that the chain has tight "controls on imported products at all stages." Still, evidently not stringent enough, as the odd spider egg can and does gets through (cue: freak outs all over the world).

"I hope I didn’t eat one but I can’t be sure," Taylor said. "I now have a phobia of buying bananas. We don’t know whether they’ve all gone."

Who needs slasher flicks? Just throw in the odd spider story. Take it from a serious arachnophobe, there's a reason these long-legged dudes are the third biggest phobia (right after death and public speaking) among sane and otherwise rational individuals.