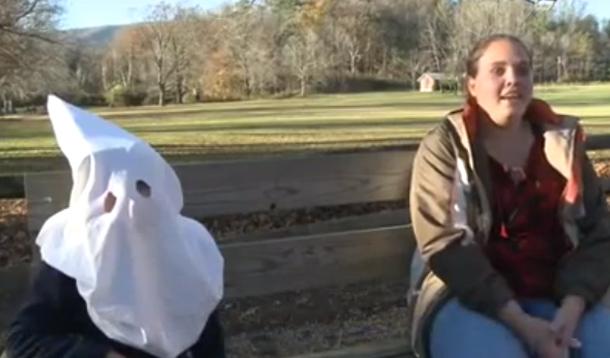 OK, so Halloween 2013 has been and gone. But the bitter aftertaste lingers on. And I'm not not talking too many sour gummies, but the shockingly ill conceived costumes that are still making headlines. From the twenty-two-year-old woman dressed as a victim of the Boston Marathon bombings, to the seven-year-old boy cloaked in KKK that would have been better used as a quintessential ghost. And who can forget this gem?

Is it just me or are people sinking to unprecedented lows when 31 October rolls around? Is Halloween now a convenient excuse to wear your hate, insensitivity, or pure ignorance (see: Julianne Hough) on your sleeve?

Whatever the reason, it's not going over well with the masses. Michigan's Alicia Ann Lynch, aka the Boston bombing victim costume, found out the hard way that you do not piss off the internet. After posting photos of herself decked out in the office, she was fired from her job. Her parents were threatened (as further prior foolishness led her to post a pic of her driver's licence, revealing personal details).

Virginia-based mom Jessica Black, who handmade her son's Klu Klux Klan garb, which she labelled "family tradition" (would that tradition be racism or sewing your own costumes?) also faced threats after posting pictures on her Facebook page.

She stands by her choice for obvious reasons:

"It's suppose to be white with white. Black with black. Man with woman and all of that," she said in the Gawker article. "That's what the KKK stands for."

I love Halloween, always have. But costumes like these are setting the bar far too low. I'm all for gore, but human decency must come above all.

I hate to say it but with so many people with pumpkin seeds for brains, it might be time to retire Halloween, after all.