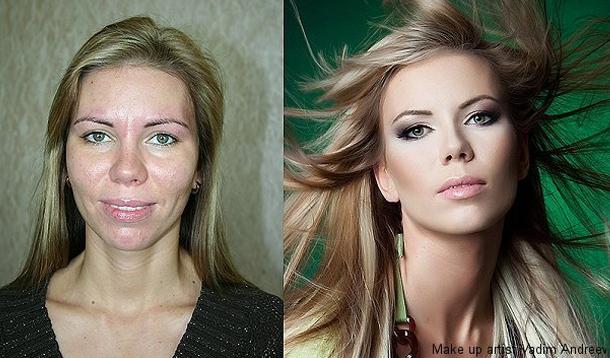 The power of makeup should never be underestimated. These 'before' and 'after' pictures will blow your mind. A Russian artist performs the most amazing transformations with a wave of his blusher brush.

According to an article in the Daily Mail, twenty-nine-year-old Vadim Andreev can turn the average girl into a cover girl, as these incredible images will attest.

Though Andreev mostly works with models and Russian celebrities, he also gives every day women the celebrity treatment for weddings and other special occasions.

"I started taking these photos to show people they can change, be more attractive, look and feel happier," he says. "I believe that every common girl can become a glamorous celebrity. I want to help everyone to see their own beauty."

But not everyone is impressed by his wizardry. Some critics on Reddit claimed that what Andreev does is akin to false advertising. Some uttered that damning word: Photoshop. But Andreev claims the only touch-ups of his images involved correcting the colour and erasing a stray hair on a model's forehead.

For more jaw-dropping makeovers and tricks of the trade, visit vadimandreev.com. No doubt you'll be seeing more of his handiwork in books and (probably) a TV show.

So much for the natural look. Personally, I hate the feeling of heavy makeup on my face, though it would be fun to go under Andreev's wand and see him work his hocus pocus.

Do you agree that all women can look like models with the right makeup and know-how?