App Predicts How Many Times You Will See Your Parents Again 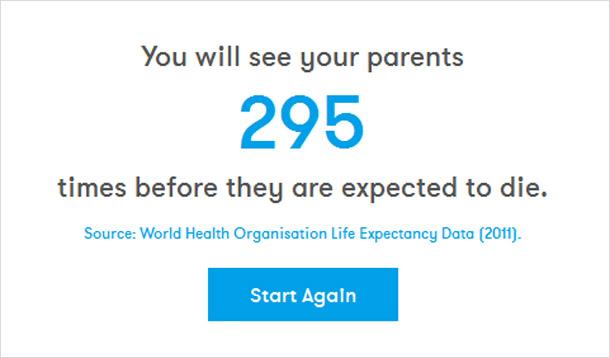 How long have you got left with your loved ones? A new app aims to satisfy the morbid curiosity in its users by predicting the answer. On the face of it, See Your Folks sounds like an innocuous, even inspired idea. Still, it's not quite as creepy as this funeral-friendly service.

According to an article in Slate, the interface of SYF is deceivingly soothing with its "gentle font" and "blue-sky background dotted with fluffy white clouds."

Once you answer questions about your parents' ages, location, and how often you see them, the technology predicts how many more times you will see them BEFORE THEY DIE. Ouch.

The British designers apparently relied on World Health Organization's life expectancy data to guestimate how many ticks our parents' clocks have left.

“We believe that increasing awareness of death can help us to make the most of our lives,” reads the site. “The right kind of reminders can help us to focus on what matters, and perhaps make us better people.”

So as far as the good people at SYF are concerned, the driving factor behind the app isn't mere shock value but a quasi carpe diem kick up the butt urging us all to spend more quality time with those who brought us into the world.

After all, being cognizant about death can only remind us to live more, right? Err...
Is the app hokey or simply morbid? Brave enough to try it out?
Category:
Health - Wellness
Tags:
see your folks
death predictor app
morbid apps
WHO
world health organization
life expectancy app
app predicts life expectancy
app predicts death
when will i die
how long will i live
death app
new apps
ipad
iTunes
mummy buzz