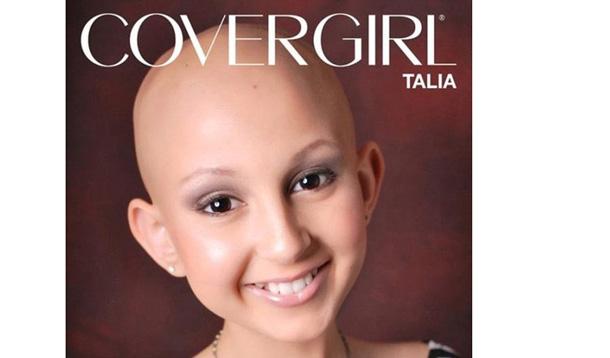 She captured the hearts of many, including talk show host Ellen DeGeneres, but sadly 13-year-old Talia lost her long battle against cancer. Talia Castellano shared her love of makeup with the world during the six years that her body became eaten up by various cancers. Her tutorials delighted the YouTube community, with one video enjoying more than 8,500,000 views.

Admired for her strength and honesty as she underwent various treatments, Talia vlogged in August 2012 to her 700,000 subscribers that the cancer had spread to her bone marrow. "Don't think I'm going to die," she reassured her followers in a video entitled "Bad News."

According to an article in the CBC, the tween documented her tireless battle against cancer. Taking her inspiration to 'just keep swimming,' Talia's dream came true—she not only met her idol Ellen, who provided the voice of the upbeat Dory in Finding Nemo, she also did her makeup!

The star kindly kept in touch with Talia, and even arranged for her to film make-up tutorial videos for cosmetic giant Cover Girl. As dreadful as the cancer made her feel, Talia somehow managed to keep her spirits high. Sadly the 13 year old has now died.

"This year I met a very special girl, and today we lost her," Ellen tweeted. "Sending my heart to Talia's family. I'm so sad."

If you were moved by Talia, feel free to post messages on her page. See how this woman turned her battle with cancer into something beautiful.