lack of education and supervision 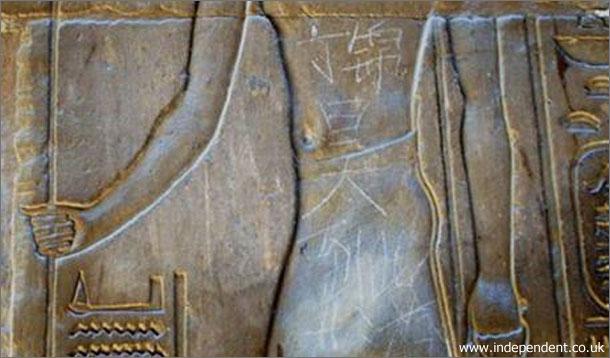 In more news from China, a teenager who defaced a piece of 3,500-year-old Egyptian artwork is facing the music after his identity was shared on the internet.

According to an article in the Independent, the 15-year-old boy from Nanjing foolishly scrawled his own name—“Ding Jinhao was here”—in Mandarin at the Temple of Luxor. If you are going to graffiti an artifact, at least have the common sense not to engrave your name into it.

When blogger Shen visited to site on the banks of the River Nile recently he highlighted the disgraceful behaviour of Chinese tourists. His post prompted readers to track down the teen.

Fast-forward to hackers tracing Ding Jinhao and releasing many of his personal details. In the process Ding’s parents admitted what their son had done while on a sightseeing tour, and issued a public apology that wasn't theirs to issue.

They even claimed responsibility for the "lack of education and supervision" that drove their son to commit the vandalism when he was younger.

They then pleaded for hackers to leave their son in peace. The Egyptian ministry of antiquities claimed the damage was "superficial" and was in the process of being repaired.

“When you go to every tourist site, you can see something like: “X has been here.” We feel ashamed if we do it abroad, why not in China?" wrote Yu Minhong. "We should learn to protect our cultural relics and understand it is also a shame to write on our own faces.”

Did the boy get his comeuppance, or did hackers go too far by probing his personal details? Should his family face a fine for the damage? Is public shaming an acceptable form of punishment?