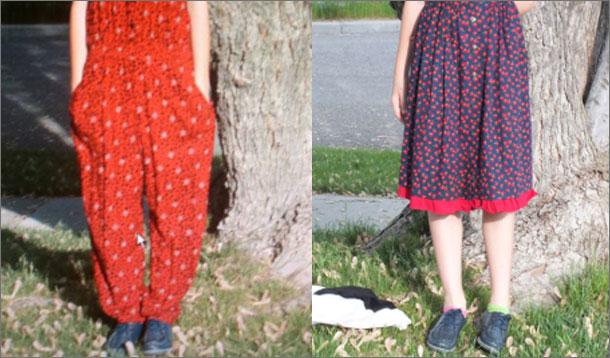 If clothes make the teen, then a Utah mom's plan to punish her daughter by making her don cast-offs backfired. After 10-year-old Kaylee repeatedly bullied a classmate about her 'sleazy' wardrobe, her mother found out. But according to an article in Gawker, Kaylee remained unapologetic about her actions.

So her mother sought to teach her a lesson—by spending $50 on thrift clothing—and forcing her daughter to wear it to school for a couple of days.

But instead of learning a lesson in humility, Kaylee looked chic and pretty damn hip in both outfits: a "cranberry Peter Pan collar" and "red floral jumpsuit."

Someone should have warned Kaylee’s mom that all the kool kids wear vintage treasures, but clearly she has an eye for standout fashion.

Kaylee, though, was by all accounts mortified by her mother's selections (and no doubt by the gone-viral photos of her posing in the outfits).

Lesson duly noted from the fashionista: Don't be a bully “because it’s stupid and it’s mean.”

What do you think of public humiliation as punishment?