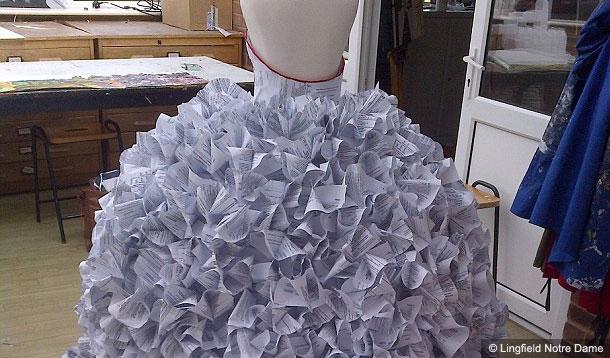 What started as an ironic school project has turned a 15-year-old British schoolgirl into a fashion celebrity, according to an article in the Daily Mail. When Demi Barnes shared a picture of the wedding dress she made out of genuine divorce papers on Facebook, she had no idea the photo would rack up more than 40,000 'likes.'

Not only has Barnes received numerous requests to design wedding dresses in the week following her post, she has also been contacted by major designers requesting copies.

Modelled after the late Princess Diana’s Emanuelle wedding gown, Barnes’ version consists of 1,500 ruffled divorce proceedings stapled to a wire bodice. The rationale behind the design is pretty mature coming from a student at Lingfield Notre Dame School in Surrey, England.

In a nutshell: too many people rush into marriage only to wind up divorced. Initially Barnes planned to design the dress out of magazine pages, before deciding on the more provocative concept.

“I’m passionate about fashion and design and am hoping someone will approach me with a work experience placement so I can turn my passion into a career.”

I have a feeling that shouldn’t be a problem…